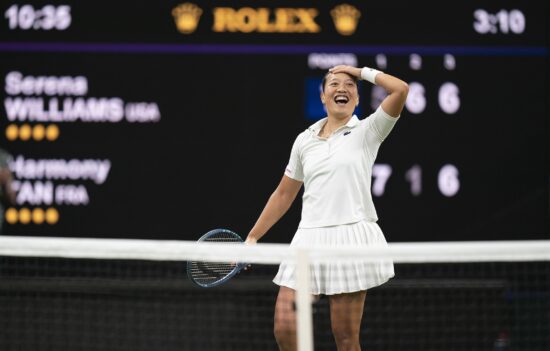 The final games in the third round for the men and women still standing at SW19 take place on Wimbledon Day 6. It promises to be a busy day of action on Saturday, with no shortage of compelling matches in store.

Rafael Nadal remains among the favorite to win the Wimbledon title this year, but he will come up against his biggest test to date on Saturday. The Spanish star clashes with Lorenzo Sonego, and the match is likely to be one of those that are played on Centre Court.

Nadal needed four sets to eventually see off Ricardas Berankis on Thursday evening. The Lithuanian posed questions for the French Open winner in the third set, but at that point, Nadal already looked to have one foot in the third round as he led 2-0. There are still areas of Nadal’s game that need fine-tuning as the tournament progresses, and we will likely learn more about his title chances from this match against Lorenzo Sonego.

The Italian is the 27th seed at Wimbledon this year, and has already looked assured on the grass. He needed all five sets to see off Denis Kudla in the opening round, but he looked much more relaxed on Thursday, as he beat Hugo Gaston in three sets. Sonego served excellently in that win, as he hit six aces and scored 77% points on his first serve.

This is the first tie that he has come up against Nadal, but he certainly has pedigree against the best players in the world. He has already beaten Novak Djokovic and has also recorded victories against two further top-ten opponents. But, we still fancy Nadal’s chances of progressing after four sets.

All eyes will be on Centre Court as the women’s third-round tie between Katie Boulter and Harmony Tan is played on Saturday. Boulter has already enjoyed an excellent season on the grass, and won the hearts of the British public following her victory against Karolina Pliskova as she dedicated her best career win to her late grandmother, who had passed away two days earlier.

The win itself was spectacular, and a clear indicator that the 25-year-old could become a standout star on the WTA tour if she remains fit. Pliskova was seeded sixth for the tournament this year and had been the runner-up at Wimbledon just 12 months earlier. However, despite going a set down, Boulter showed fight to win the next two sets 7-6, 6-4, and reach a Grand Slam third round for the first time.

Harmony Tan is also enjoying a stellar run at Wimbledon this year, and playing way above her world ranking of 115 would suggest. She caused the shock of the Championships in the first round with a dramatic three-set victory over legendary champion Serena Williams, before knocking out 32nd seed Sara Sorribes Tormo in straight sets on Thursday.

There is something special about this showdown, as both ladies have shown all the credentials that they could go very deep at Wimbledon this year. However, we expect Tan’s memorable run to come to an end, as we could see Boulter progressing in three sets.