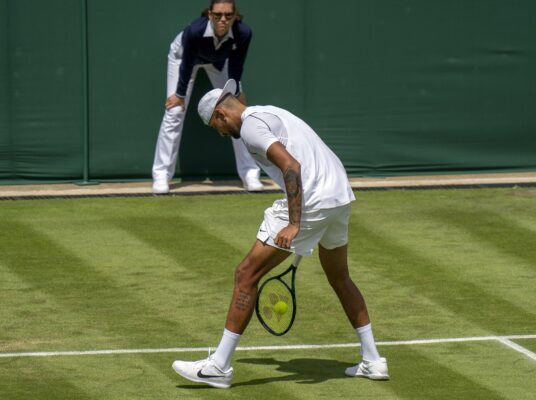 It was a memorable weekend at Wimbledon this year, as tradition was broken to mark 100 years of Centre Court with players involved in action on the middle Sunday. The action continues on Wimbledon Day 8, with the round of 16 taking center stage on the main show courts.

While Nick Kyrgios may be one of the most controversial players in the world, it is certainly hard to argue against the stance that he is box office watching. The Australian was involved in one of the most dramatic tennis matches that we have seen in many years over the weekend. Kyrgios and Stefanos Tsitsipas served up a classic, which involved tantrums from both players and docked points after code violations, but it was certainly the drama that kept fans engaged.

In the end, it was the Australian that came through the drama with the win, as he eventually won in four sets. He is now the clear third favorite in the betting to win the men’s title this year, and it’s hard to dismiss his chances given the roll he is on.

The unseeded American player Brandon Nakashima stands in the way of Kyrgios and a place in the semi-finals. It has been an excellent tournament for the 20-year-old, and he has already claimed a notable scalp with a four-set win against Denis Shapovalov in the second round. He easily breezed past Daniel Galan in the third round, but this will be his first taste of Centre Court on Monday. But, it’s hard to see past the Australian.

The women’s side of the draw has been blown wide open with the exits from Iga Swiatek, Jelena Ostapenko, and Petra Kvitova. That means that there is a chance remaining for a number of remaining unseeded players in the draw. Harmony Tan has been one of the stories of the tournament to this point, most notably following her victory against Serena Williams in the opening round.

Many believed that her Wimbledon fairytale would come to an end against Katie Boulter on Saturday, but the French player stunned the Brit with a straight-sets victory. Another big test lies in wait on Monday, as she comes up against the 20th seed.

Amanda Anisimova is easily one of the standout players in the women’s half of the draw and will feel as though she has every chance of winning a first Grand Slam title this year. She eliminated one of the front-runners in the third round, as she came back from a set down to beat Cori Gauff. The 20-year-old previously reached the semi-finals at the French Open in 2019, but this is her best performance on the grass to date. However, we would be keen to side with Tan yet again, as she is making a habit of excelling when considered the underdog.