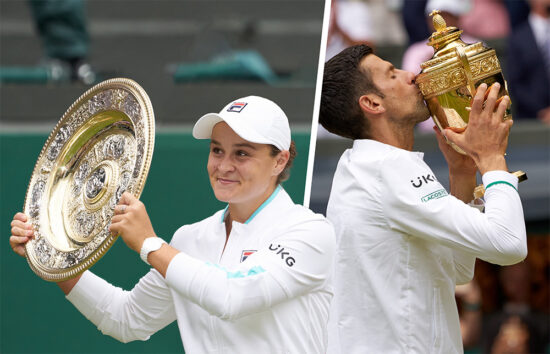 Novak Djokovic was such a heavy favorite to win Wimbledon at -105 before the competition began, and it became clear why during the tournament as he brushed everyone aside on his way to the trophy.

Of course, there was the occasional jitter on the way and he did lose the first set in the final to Mario Berrettini, but he immediately broke his serve to begin the second set and he didn’t look back from there.

Ashleigh Barty was the second favorite to win the women’s competition at +500 behind Serena Williams, and both will be expected to challenge for the US Open next month after strong showings.

When will the US Open finals take place?

Djokovic also comes into the US Open as a heavy odds-on favorite, so it’s going to take something special from any of the chasing pack to beat him to it.

On their day Rafa Nadal or Roger Federer could be good value but the Spaniard is struggling with injuries and Federer was utterly decimated by Hubert Hurkacz at Wimbledon so he’s not coming into this in great form.

The odds do tell us that if someone can somehow take Djokovic down then this could be one of the most exciting competitions in years, while Dominic Thiem comes in as the reigning champ so he’ll be desperate to keep hold of the title.

There may not be a lot of value in Djokovic at -110, but if you want to back the winner then it’s tough to look beyond him.

The women’s competition does look more open from the start, while you can guarantee that Naomi Osaka will get some ridiculous coverage and press attention due to her decision to withdraw from Wimbledon after also being forced out of the French Open due to refusing to fulfill her press duties.

Barty is expected to put up a strong challenge again after her triumph in England, while the home advantage could also spur on Serena Williams and Coco Gauff to go deep into the tournament.

Clearly this one isn’t as easy to call as the men’s competition, but it will be interesting to see if Osaka is helped or hindered by her break.