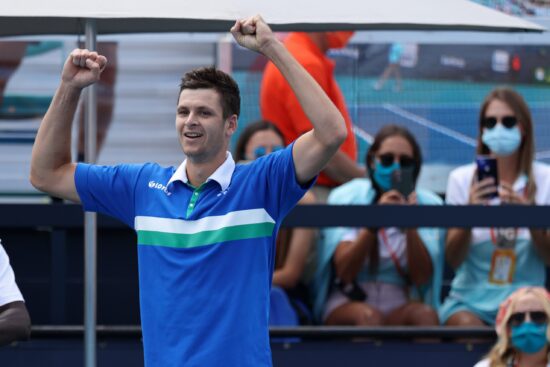 Wimbledon is deep into the second week, and the men’s part of the competition reached the quarterfinals. Besides everlasting Roger Federer and the unstoppable Novak Djokovic, we have a few other players involved here.

The Pole posted arguably the biggest win of his career after five days and a big comeback that saw him reaching Medvedev’s lead twice and eventually enduring the pressure and other adversities.

This loss means that Medvedev can’t dethrone the -250 favorite Novak Djokovic from the top of the tennis world, but what is even more important, the Russian missed another chance to win his first trophy. Many believed that he has the capability of challenging Novak and possibly beating him on the grass.

The match was stopped in the fourth set, with Hurkacz leading 4-3 due to the rain. Court No.2 isn’t covered, which is why the organizers decided to continue the match first thing in the morning.

Medvedev was unrecognizable today. Whether because the event continued at the Central court or something else, the Russian couldn’t compete with the inspired rival, gaining more confidence as time went by.

He easily lost the fourth set, making a double serve fault, before losing his serve in the third game of the fifth set. Meanwhile, Hurkacz was routinely keeping his serve, closing the match without any trouble at all.

Nobody could really say that Federer is 39 years old, as he looked dominant on the court in every aspect of the game. He became the oldest player to reach this stage in London. He may be a longshot at +700 to win, but he’s still the second favorite behind Djokovic.

Novak Djokovic defeated Cristian Garin also with 3-0, by sets, 6-2, 6-4, 6-2. The Serb cruised into his 50th Grand Slam quarterfinals, becoming only the fifth ever tennis player to do so.

His opponent will be Marton Fucsovics, No.48 in the ATP rankings. The Hungarian defeated Andrey Rublev in five sets, 6-3, 4-6, 4-6, 6-0, 6-3. Many believe that this should be an easy and routine task for Novak, who is the biggest favorite to take the title here, and level himself with Nadal and Federer with 20 Grand Slam titles.

In the remaining two pairs, Karen Khachanov meets Denis Shapovalov, two youngsters who are aiming to do something big on the scene and improve their stocks in the year to come.

Matteo Berrettini and Felix Auger Aliassime are completing the quarterfinal events. The Italian is in very good shape, while on the other side, the Canadian indicates enormous potential and wants to break into the semifinals, his first at one major.

All the matches take place on Wednesday, July 7. The precise order of play is still not released.