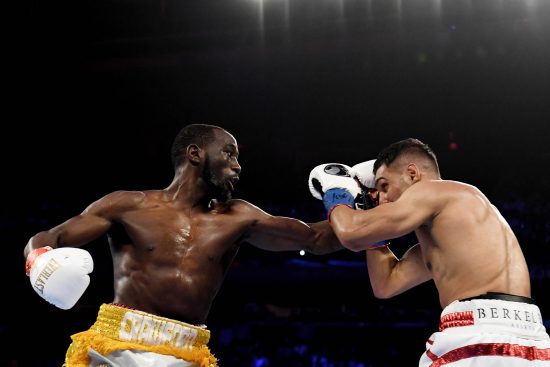 There will be thrilling boxing action taking place this weekend in Las Vegas, as two of the best welterweights in the world meet. Terence Crawford will be looking to defend his WBO welterweight championship against Kell Brook, but which way will this fight go?

Terence Crawford vs Kell Brook Tale Of The Tape

There is no doubt that Crawford will go into this fight as the heavy favourite to get the win, as he is rightly regarded as one of the best active boxers in the world today. He has been named as the ESPN fighter of the year of two occasions, with the latter of those coming in 2017. Crawford is one of just eight male or female fighters to have held all four major boxing titles in one weight classification.

There are no shortage of skills that fans will be able to see on display this weekend from Crawford, as he is believed to have one of the best ring IQs in the business, while his fast hand speed and punching power have caused no end of problems for rivals. Meanwhile, his ability to switch from an orthodox stance to southpaw has also given him an advantage throughout his career.

Crawford has beaten every main challenger since winning the WBO welterweight title, with his last defence coming in December last year, as he beat Egidijus Kavaliauskas by knockout in the ninth round. He has also beaten Amir Khan, Jose Benavidez Jr, Jeff Horn and Julius Indongo by knockout over the past three years.

Kell Brook will be the outsider in the boxing betting, but he does have proven quality in the ring. He was the IBF welterweight champion for three years between 2014 and 2017, while he was also ranked as the best boxer in the welterweight division by The Ring back in 2017. He is now considered the third-best light-middleweight in the world by BoxRec. The return to the welterweight division has already saw Brook look more comfortable, as he found himself at a crossroads after successive defeats against Gennady Golovkin and Errol Spencer Jr.

However, since the 2017 defeat, he has won his last three fights, with all three of those coming in his hometown of Sheffield. The most recent of those came in February, as he beat Mark DeLuca by TKO in the seventh round to win the WBO Inter-Continental light middleweight title. This victory ended a tough run for the Brit, and he vowed that 2020 will be his last chance. His record is still impressive with 39 wins from 41 bouts, and Crawford will be aware of the skills that the British fighter will bring into the fight.

There is no doubt that Kell Brook will be able to present a stern test for Terence Crawford, as he hasn’t been tested in the ring for a number of years now. However, this will be Brook’s swansong, and we find it hard to predict anything other than a win for the current champion.