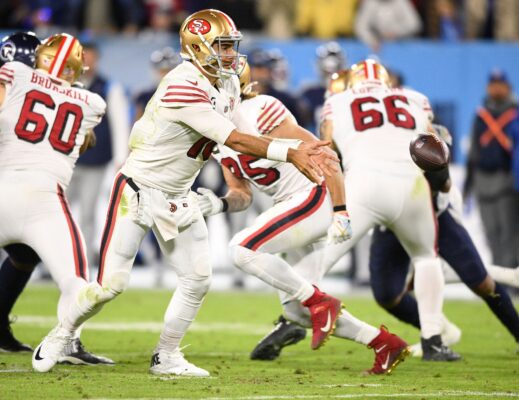 With an 8-7 record, the San Francisco 49ers are not far from securing a place in the postseason. If they win their Week 17 game, they could book a ticket to the playoffs via a Wild Card entry. For that to happen this week, they also need to see the New Orleans Saints losing to the Carolina Panthers. However, if the Niners lose on Sunday, all hope’s gone.

So, will they lose? It’s very unlikely. Not only are they very motivated to win, but they also have a pretty easy game on their hands. The thing is that their Week 17 opponent is the Houston Texans, who are among the worst teams in the NFL. Their record is 4-11 – only two of the 32 NFL teams have a worse record than them.

On the bright side for the Texans, their recent form has been pretty good. They’re coming to San Francisco after back-to-back wins.

The Niners Need to Win on Sunday

Still, with a little bit of luck, the Niners could book the ticket to the postseason even before the game with the mighty Rams. For that to happen, though, they need to beat the Texans on the second day of 2022.

San Francisco’s form isn’t too great. They are 2-2 in December, with one of their wins happening after overtime. It happened against the Cincinnati Bengals in Week 14. The Niners’ most recent game saw them losing by three points to the Tennessee Titans.

Another bad thing happened in that game – their starting QB Jimmy Garoppolo reportedly suffered a thumb injury, for which he could miss the next game.

Still, despite having some problems on their hands, the 49ers definitely have a better roster than the Texans. This goes despite the fact that Houston has been playing top football lately.

Can Houston Win Its Third Game in a Row?

In Week 15, we saw the Texans beating the Jacksonville Jaguars 30-16 on the road. It was no surprise as the Jags have been even more disappointing than them this season.

However, what happened in Week 16 was a huge shock. What happened was that the Texans destroyed the Los Angeles Chargers 41-29. The reason why this is a really surprising score is that Houston played with its third-choice quarterback.

With Deshaun Watson being dropped by the team and Tyrod Taylor struggling with fitness (and form), the Texans put rookie Davis Mills in the starting position. The first-year QB did not disappoint.

Although he did need time to adjust to pro football, Mills put on a superb performance in Week 16. We saw him throwing for 254 yards, two touchdowns, and no interceptions. Can he do something similar against the Niners?

The 49ers have a much, much better defense than the Chargers, so the Texans’ offense shouldn’t hope for much. We probably aren’t going to see them scoring too many TDs. Instead, it’s the San Francisco offense that should be in the spotlight on Sunday. They have the skills and the motivation to blow out the Texans.