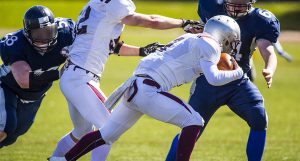 With a season of experience under their belts, we look back at the best offensive rookies in the NFL this past season.

When you consider how poor his offensive line was this season, it’s amazing the type of numbers Saquon Barkley was able to put up in his rookie year. He finished the year with 1,307 rushing yards to go along with 91 catches for 721 yards. He became his aging quarterback Eli Manning’s security blanket and was the team’s most reliable offensive player which is saying something considering Odell Beckham Jr is one of his teammates. The Giants will need to shore up their offensive line issues as well as addressing the need for a quarterback of the future. His team still has a long way to go but as for Barkley himself, he looks like the real deal.

Baker Mayfield has given the Cleveland Browns hope

We don’t need a history lesson on how bad the Browns have been for the last few decades, everyone in sports is aware. The Browns loyal fans have been praying for a franchise quarterback to lead them out of the darkness and it appears they may have found their man in Baker Mayfield.

Coming into the draft there were some questions about his size and whether that would translate to the pros. He didn’t win the job out of training camp which looking back seems absurd but Mayfield waited his turn and snatched the opportunity presented to him.

Mayfield finished the season 7-7 a starter and while that might not seem impressive to some, his record must be looked at in the proper context. When Mayfield took over as the starter his team was 0-1-1 and he lead them to 7 wins. In the previous 2 seasons, the Browns had won a combined 1 game. With all of that in mind, what Mayfield did was provide hope to a fan base desperate for any type of success. The Browns have a lot of talented players on both sides of the ball and it will be interesting to see what direction this team goes moving forward. With all of the other teams in the division appearing to be in transition, this might finally be the Browns time.

When the Denver Broncos took a chance on undrafted running back Phillip Lindsay, they couldn’t have imagined he would have become a Pro Bowler as a rookie. It’s not that they didn’t believe in their guy, it’s that it hadn’t happened before until now. After not even being invited to the combine let alone not being drafted, Lindsay has proven all of the doubters’ wrong by making it to the Pro Bowl in his first NFL season. He rushed for 1,037 yards and 10 touchdowns this season even though he started off the year as the backup running back. Lindsay will unfortunately have to miss the Pro Bowl because of a wrist injury but he is still enjoying the moment to the fullest.