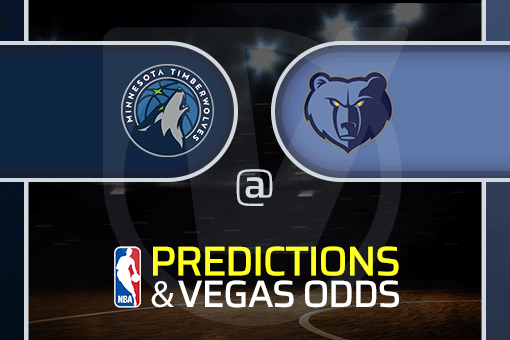 There’s no hotter team in the NBA right now than the Memphis Grizzlies and this high octane production is about to be put on display. The Minnesota Timberwolves visit FedExForum on Thursday playing their 7th game on the road out of the last 8, but also with an offense that has scored 125+ in three straight. Don’t sleep on the T’Wolves, especially since they are just +4.5 underdogs.

Timberwolves Scoring at Will

Minnesota has shown some nice things in the early part of the 2021/22 campaign, and there are reasons to think this squad could stay in the playoff hunt well past the all-star break. The T’Wolves are currently 20-21, but that’s good enough for 9th in the West and plus, this is a team that (like everybody) has battled a lot of missed time with players in health and safety protocols.

Chris Finch has his team’s offense working as Minnesota has averaged 133.6 ppg over their last three. That’s still only been good enough for a 2-1 record though thanks to a 128-125 loss in New Orleans on Tuesday on a Brandon Ingram buzzer-beater. Minnesota’s version of the big three was still solid as Karl-Anthony Towns had a 2nd straight 26+ point game, Anthony Edwards went for 22+ for the 4th time in the last 5, and D’Angelo Russell had his fifth point/assist double-double in the last six games.

The Timberwolves will know where they stand on a turnaround season when they match up with red hot Memphis right now. Minnesota has split with the Grizzlies losing 125-118 in early November at FedExForum but then returning the favor with a 138-95 beating back in the Twin Cities.

When Will This Stretch End?

Memphis has split with Minnesota in two games this season even with Ja Morant playing in both contests, but this is still a different Grizzlies squad right now. Memphis is in the midst of a 10-game win streak and instead of getting lucky or looking like they’re starting to fade down the stretch, this is a team that seems to only be getting stronger as evidenced by Tuesday’s 116-108 win over Golden State.

There’s always a chance at a letdown on Thursday vs. Minnesota after the Grizzlies’ big win over the Warriors last time out. Morant dominated yet again with 29 points, the 5th time in the last 8 he’s hit for 29+. Morant had 33 vs. Minnesota in early November and the game still went to OT and then he was held to 11 points in 26 minutes in the blowout loss back in the Twin Cities.

One major goal for Memphis on Thursday is to stop D’Angelo Russell, who seems to take these matchups with the Grizzlies personally. Russell has 30 and 28 points in the two meetings this season and makes a great inside-out combo with Towns.

This is a very tough spot for Memphis as they are coming off the emotional win over Golden State on Tuesday to get the win streak to 10 games but also have a meeting with Luka Doncic and the Mavericks on Friday night. That could put the matchup with Minnesota in the proverbial ‘sandwich spot’ which isn’t great considering the Timberwolves have a lot of talent and have played Memphis tight this year. Minnesota stopping the streak wouldn’t be a shocker here.