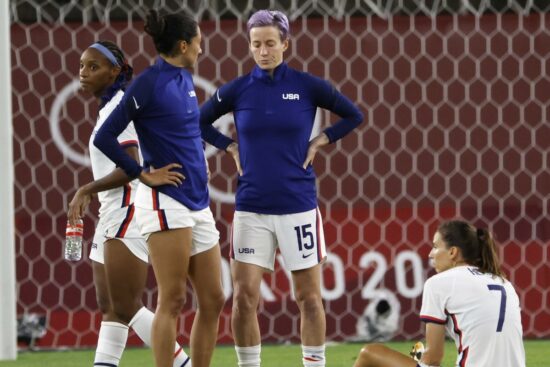 There wasn’t too much good news from Tokyo regarding the US ladies’ teams. The soccer team had another poor performance, while gymnastic and softball teams concluded their respective competitions with silver medals.

USA Holds Onto a Goalless Draw Against Australia

Rapinoe, Morgan, and the rest of the girls played 0-0 against Australia, ending second in Group G and advancing to the knockout stage. They would only finish ahead of the Aussies due to a goal difference, but to be honest, Vlatko Andonovski’s side displayed a disappointing performance.

Apart from Alex Morgan’s disallowed goal in the 33rd minute of play, we haven’t seen too much from the three-time Olympic gold winners. On the other side, Australia had a couple of chances, one woodwork struck and endless initiative, but failed to score that goal that would push them ahead of the US girls.

Team USA meets the Netherlands in the quarterfinals.

The hosts won the match for the gold medal with 2-0, in a pretty much dull contest that would end wrong for the Americans. This is the second time in a row that the Japanese women’s team defeats Team USA in the Olympic finals, after the 2008 Beijing finals.

After that, softball had a pause in two Olympic editions, before being restored at Japan’s request. It seemed as if the hosts knew that their team might upset the Americans once again.

Simone Biles was one of the biggest stars of the Olympic tournament. Still, in the crucial moment, one of the best-ever gymnasts in the history of the United States picked up an injury that prevented her from giving 100% today. Biles had to pull out of the competition, which allowed the Russian Olympic Committee to claim the gold medal.

It was a close call in the finals, but the details decided in favor of the Russian athletes competing under the Olympic flag. Things could have been different with Biles available, but that is a “what if” story now.

An exciting battle was seen in the clash for the third place, where Great Britain outscored Italy. The British team is arguably one of the most talented, and many predict a bright future for them at the next Olympics in Paris.

US Basketball Team Posts the Only Win of the Day

For the 50th time in a row, the American women’s basketball team won an Olympic match. For sure, the girls are not like their male counterparts, who are way below the expected level of play.

Today’s victim was the Nigerian team, 81-72. The young and energetic Nigerian team dictated the tempo in the first period, but after that, the best team in the world took over, making a 23-0 run that would sink all the rivals’ hopes of committing a massive upset.

Ezinne Kalu had 16 points for Nigeria, while Victoria Macaulay had 11. On the other side, A’Ja Wilson scored 19, and Brittney Griner had 13.