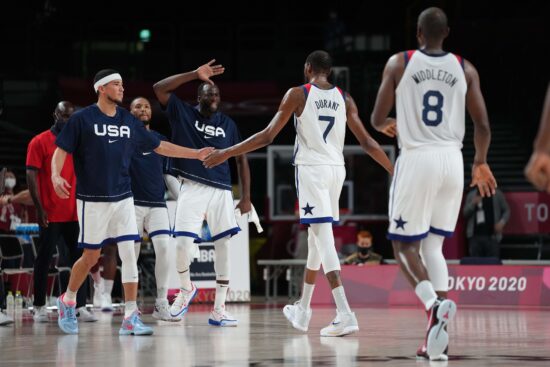 Kevin Durant and the boys will have to face one of the toughest tests at these Olympics already in the quarterfinals. The US team’s next rival is the current world champion, Spain.

Spain’s Defeat Sets a Derby in the Quarterfinals

The Red Fury lost to Slovenia today 95-87, losing first place in their group and making its life very complicated. Despite having a double-digit lead throughout most of the match, reigning world champs failed to show up in the finish, allowing the Slovenian’s to post one of the most important wins in their history.

Luka Doncic was once again in the middle of the story, even though he didn’t have some unreal scoring figures. The Dallas Mavs superstar had 12 points but 14 boards and nine assists, playing very well on the defensive side of the ball as well.

The guy with the most points in Slovenia was Denver Nuggets’ Vlatko Cancar with 22, Mike Tobey had 16, and Kremen Prepelic added 15.

Ricky Rubio had 18 for Spain but missed a couple of important shots, Abalde scored 14, while Lull and Rudy Fernandes delivered 12 each.

Spain now faces the USA, against whom they lost recently in Las Vegas, 83-76. This match promises a lot of fun because players on both sides know one another very well.

On the other side, Slovenia got the weakest quarterfinal opponent per all the experts, Germany, who appears at this Olympics without its biggest star, Lakers’ playmaker Dennis Schroder. The Germans finished their group stage behind Italy and Australia, beating only Nigeria. Without a doubt, anything but Slovenia’s easy win would be a major surprise.

France indicated ambitions to win the Olympic gold beating Team USA in the opening game of their campaign. Loaded with NBA quality, the Gauls displayed excellent performances, beating both the Czech Republic and Iran without any particular problems and winning the top place in their assembly.

Their opponents will be Italians, who surprisingly reached the Olympics, eliminating Serbia in the qualifying tournament played in Belgrade. Golden State’s Nico Mannion is a breakthrough and is already the starting point guard. NBA veteran Danilo Gallinari is on the team, too, as well as the former New Orleans Pelicans forward Nicolo Melli.

Australia won the group by beating Italy in the direct clash. Therefore the Aussies play with Argentina, who defeated Japan this morning, 97-77, earning their ticket to the last eight. Needless to say that the Australians are massive favorites in this matchup, but nothing is guaranteed with the Argentinians on the other side of the court. They’ve reached the finals of the previous World Cup and still have the quality to explode and defeat any team on the globe.