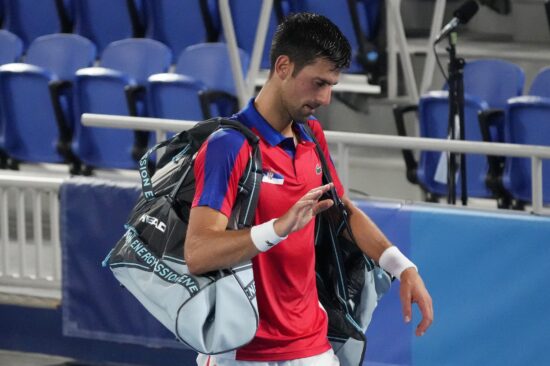 Alexander Zverev delivered one of the biggest sensations of these Olympic Games, beating the ultimate favorite for the gold, Novak Djokovic. In a highly odd match, the German managed to come back and roll over Novak, who had one of his worst days in the recent few years, as he suffered a defeat in the semifinals of mixed doubles as well.

The German player was down 1-0 in sets and 3-2 in the second sequence. After that moment, he went on to win 10 of 11 games, which saw him committing one of the biggest surprises in tennis this year. Not only did he defeat Novak, but he also denied Serb a chance to win the Golden Slam, something no player in the men’s competition did before.

The final result of this match was 3-6, 6-3, 6-1 for the young German, who finally beat Djokovic in 2021, following two defeats in which Zverev opened the match better, taking the first set, but eventually losing in the end.

Novak started this clash much better, winning the first set without any particular problems, fighting through all that Zverev sent from the opposite side of the court. But in the second set, the world’s best player simply stopped playing, as if he lost all of his juice.

Meanwhile, Zverev shifted into a higher gear after seeing the rival’s struggles. Problems Djokovic faced boosted the youngster’s morale, and the German quickly solved the match in his favor.

Following the match, Zverev broke down crying, while Novak looked frozen. This is the second time for the Serb to lose the semis of the Olympics, following Beijing 2008, once he eventually reached the bronze medal.

Djokovic suffered another loss this Friday, the one in the mixed doubles semis, where he appeared with Nina Stojanovic shortly following his singles clash. Alsan Karatsev and Elena Vesnina eliminated the Serbian team in straight sets, 7-6, 7-5.

The Russian player beat Pablo Carreno Busta in straight sets, 6-3, 6-3. Khachanov dominated against the rival, showing a much versatile approach in the attack while making far fewer mistakes than Carreno Busta.

He ended the match with 10 aces, and his percentage of services won on the first serve was an amazing 92%. It could be said that this aspect of Khachanov’s performance was the decisive factor for his victory. World No.25 used his first match point, putting an exclamation point on today’s superb performance.

Russians had a wonderful day, because they have two teams in the mixed doubles competition.

Andrey Rublev and Anastasija Pavlyuchenkova reached the gold medal match after a marathon against the recent Wimbledon champion, Ashleigh Barty and John Pierce, whom they beat after two hours of play and three sets. 5-7, 6-4, 13-11.

Those who watched had the opportunity to see a war on the court, with the Russian double having more composure in the defining moments of the clash.