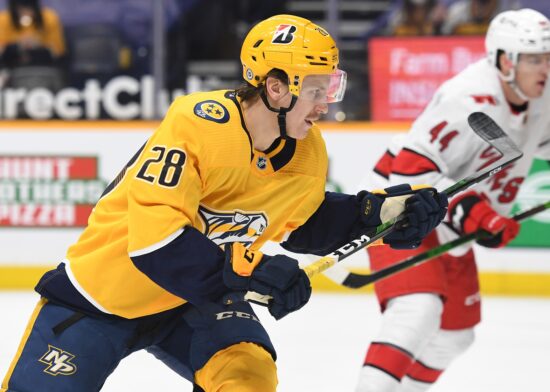 There was welcome news for the Nashville Predators on Monday evening, as it was revealed that forward Eeli Tolvanen had signed a new deal with the franchise. The signing was greeted by fans of the franchise, but it has done little to help their chances of winning the Stanley Cup this season, according to the latest odds for the prestigious trophy.

The announcement of the new deal for Tolvanen was announced on Monday by the franchise, as it was revealed that the star would get an annual salary of $1.45 million. There had been fears that an agreement may not have been reached by fans, but the forward is no longer a restricted free agent. The Finish forward was picked up by the Predators in the 2017 NHL Draft, as he was selected 30th overall by the franchise. He made just three appearances in his first season in Nashville, but became a more prominent player throughout the 2020-21 season.

During that campaign, he played 40 times for the NHL outfit, and scored eleven goals and recorded eleven assists. It was a breakout season for the 22-year-old, as he accumulated 22 points for the franchise. He also went on to play in the playoffs for the first time at the tail end of that season, as he played four times as the Predators were knocked out in the first round of the Central Division by the Carolina Hurricanes.

The Nashville Predators will be looking to achieve something that they have never previously done in 2021-22, as they will be looking to win the Stanley Cup for the very first time. Their most successful period to date came between 2017 and 2019, as they won two Division Championships. However, the biggest prize has so far eluded them.

Work has been done off the ice to bring in the talent that could take them to the desired level, with Zachary L’Heureux and Anton Olsson being brought in from the Carolina Hurricanes. Meanwhile, they have also brought in talent from the free agency in the forms of players such as Matt Luff, David Rittich and Matt Tennyson. The latter of those was a two-year deal, while the other two signings are both one-year signings.

However, players have still left the franchise, with Pekka Rinne retiring from the sport, and Calle Jamkrok joining the Seattle Kraken in the expansion draft. The signings made off the ice has done little to help their chances this season, according to the latest odds. The Predators are valued at +7500 outsiders to win the Stanley Cup this season. Only six other franchises are currently below them in the betting. Meanwhile, the clear favorites to win the prestigious trophy remain the Colorado Avalanche.