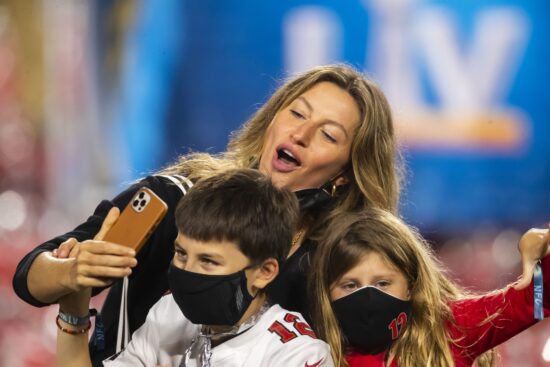 We could have one of the more interesting alimony cases of all time on our hands if NFL QB Tom Brady and supermodel Gisele Bundchen indeed decide to go through with their rumored divorce. Bundchen has reportedly not been happy since Brady ended his 40-day retirement and announced he would be back with the Tampa Bay Buccaneers for at least one more season, with the couple living in separate homes so far in the 2022 NFL season.

While the list of wives that would be upset for their husbands returning to work for a $15 million salary is short, money is not an object in the Brady vs Gisele marriage or possible divorce. Brady is pushing nearly $300 million in his NFL paychecks alone with another $150-$200 million in endorsements, and he’s not even the breadwinner of the family as Bundchen’s net worth is around $400 million. Being the highest-paid model in the world for 15 years (2002-2017) has its perks. That’s just cash-in for both parties, not counting investments.

When one door closes, another one opens and it’s projected that both parties in the Brady vs Gisele argument will be just fine financially. It would also be a real stretch to see either NFL Hall-of-Famer Tom Brady or world-renowned Supermodel Gisele Bundchen having to turn to Tinder to get their next date.

The Vegas odds are open on Brady’s next girlfriend, but right now it seems like the 45-year-old is married to football. Brady is going to squeeze out the last little juice of his long NFL career while he still physically can, so starting a new relationship now is highly unlikely.

While the Vegas odds are currently off on the Brady vs Gisele who gets engaged first props, Bundchen has to be the odds-on favorite. She’s likely felt abandoned for the last 5-6 years as Brady continually contemplated retirement, and maybe just looking for a partner whose best ability is his or her’s availability. Brady will probably be fine with that…as long as Gisele doesn’t start dating Gronk.