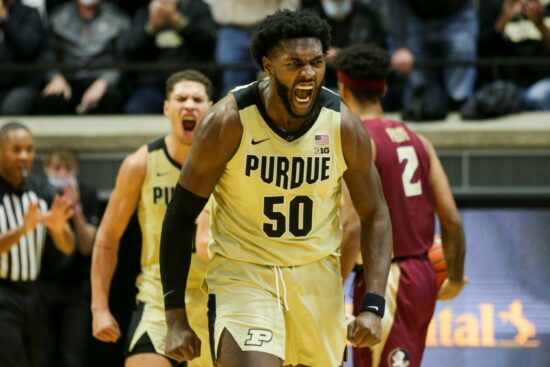 The Purdue Boilermakers have had many reasons to celebrate over the last few days. With a solid 93-65 win over Florida State Seminoles, the squad was able to deliver a strong statement in the fight for the number one in the AP Top 25 rankings.

As margins begin to narrow, Purdue’s strong gameplay has allowed the squad to close in on those characteristics that have permitted Duke and Gonzaga to dominate the top spots.

The Boilermakers currently have a flawless 7-0 season record. According to coach Matt Painter, the team’s true potential is being partially realized, and those seven wins are just the beginning of what’s to come.

On Tuesday night, Jaden Ivey was able to lead the squad to victory with 18 points, followed by Brandon Newman with 13. Zach Edey is leading the squad on the stat sheet averaging 16.9 points per game, and Sasha Stefanovic leads in rebounds with 4.9 per matchup. It’s safe to say Purdue’s roster is stepping up to the challenge.

Boilermakers’ Have Their Highest Stats in the past 10 Years

Purdue is putting together some strong numbers that have once again placed the squad on the list of potential 2021-22 NCAA Championship contenders. The team is averaging 92.4 points per game, which is number two overall in the country.

They have also been able to limit their points allowed to 64.1 per game. Additionally, while averaging 42.6 rebounds and 19.7 assists per game, Painter’s squad is aiming for higher ground, and all of their raw talents have led them to one of the most successful season starts in the last decade.

With this fast start, Purdue is currently the only Division I squad in ten years to average at least 80 points while shooting 50% from the field and 39% from the 3-point range. This squad looks very dangerous, and the top-rank teams need to watch out for the Boilermakers in their thirst to deliver even stronger performances.

Gonzaga and Duke Fight to Stay Atop the Rankings

The Gonzaga Bulldogs and the Duke Blue Devils are now the top targets for teams seeking to dominate their conference and division rankings in the NCAA.

With Purdue’s recent jump to the number-two spot, just days after Duke displaced Gonzaga at number one, the teams continue to fight to move up in the rankings. For Purdue, the odds of winning the 2021-22 title remain at +1200. Yet, the squad has proven that numbers can change and that even the top-ranked teams can falter.

The Ohio State Buckeyes were underdogs against Duke before their Tuesday night matchup and were able to run past the Blue Devils with a 71-66 win.

This last showdown proved that even mid-level squads have the potential to beat the top-ranked teams. As the season progresses, the uncertainty factor continues to be highlighted by the competitive nature of NCAA Men’s Basketball.