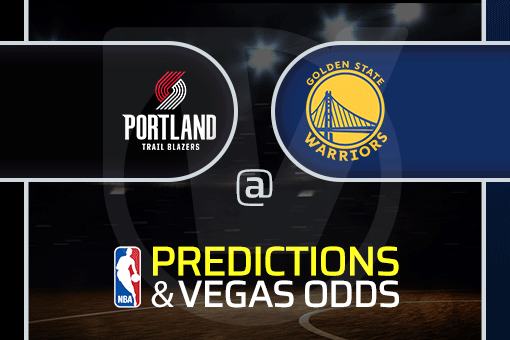 The Trail Blazers want to take down the Golden State Warriors and stay above the .500-percent mark. Meanwhile, the Warriors are still cruising through the NBA, having only two defeats in 18 meetings.

Bumpy Start of the Road Trip

The Blazers lost the first of their three road games set for the next five days. After recording four victories, all at home, Lillard and the boys suffered an unpleasant loss against the Kings, 125-121, which hurt the Blazers fans a lot. They hoped to see a win against the poor Kings and a positive intro for the Warriors’ matchup.

Portland allowed the Kings to shoot 52.3% from the field, and to have 60 points from the paint. On the other side, they too had a solid efficiency from under the rim, 58 points, but the shooting was 46.8%.

Lillard had 32 points with 10 dimes and six boards. Jusuf Nurkic had a very good game with 28 points and 17 boards, hitting 12 of his 17 shooting attempts. Norman Powell added 22 and Nassir Little 16 buckets. Even though they all had excellent offensive stats, the defensive contribution was practically non-existent.

The Curry Brothers have met this Wednesday night, and the two-time NBA MVP had more reasons to be happy following the contest. Steph’s Warriors easily routed the 76ers with 116-96, and also, he had one more point than his brother, 25-24.

The Warriors scored almost twice as many threes in this one, 15 compared to the 76ers’ eight, and also dopped 25 fast break points, while Philly had only five. The fantastic ball movement and the quickness in transition is still their most powerful weapon, which eventually allows them to have open three-point shots or some easy layups.

The Trail Blazers had a positive record over the Warriors in the 2020/21 season, winning two and losing one game. We just want to say that since 2016, these teams met three times in the playoffs and that the Dub Nation has 12 wins, while Portland won one event.

The Warriors have been in turbo mode since the season began, and we simply can’t see them losing this event. Portland’s defense is one of the worst in the NBA and imagine what would they look like against arguably the top favorites for winning the NBA title. We respect Dame and CJ, but still, with their best performances, they can’t match the Warriors’ pace and rhythm. Therefore, the Warriors will win.