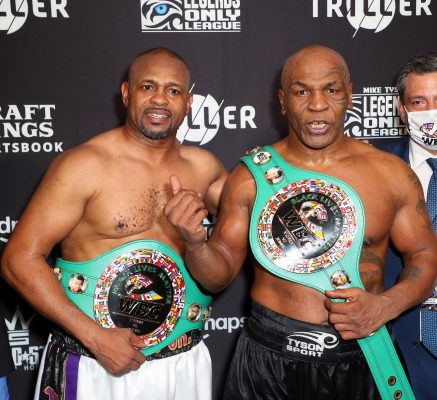 Mike Tyson vs Roy Jones Jr. fight goes the distance and ends in a split draw. Both fighters managed to stay on their feet after eight rounds, each lasting for two minutes.

The exhibition bout had some special rules, enacted for the sake of the boxers’ health, considering that they’re both in their 50s.

Thicker gloves, no knockouts allowed, no bad cuts – these were some of the rules that made boxing fans worry about the level of excitement the bout was going to provide.

However, as soon as the two former champs stepped into the right, it became clear this was going to be an exciting fight. And it really was, until the very end.

We saw fighters clinch and throw short punches on numerous occasions. The ref Ray Corona was busy, having to break the clinches often.

From time to time, we did witness Tyson throwing his legendary left hook, as well as Jones dancing around like he did in the good old days. That did make him fatigued, but he continued pushing. In fact, we saw him turning up the volume in the last couple of rounds.

As a result, Jones got himself a win on one of the scorecards. With Tyson being scored as the winner by one of the judges, and the third one scoring a draw, a split draw was declared.

Even though the headliner fight was Tyson vs Jones, the fight between YouTuber Jake Paul and the former NBA Slam Dunk champion was arguably the most entertaining bout of the evening. It’s solely due to the fact that Paul absolutely demolished his opponent.

The 23-year-old YouTube star dropped his 13 years older opponent on two occasions, before finishing him with a swinging right hand at 1:24 in Round 2. The first knockdown happened early on in the fight, when Paul hit Robinson right above the ear, causing the big man to fall.

Robinson did get up and manage to finish Round 1 on his feet. In Round 2, he got knocked down once again, with a hit to his forehead. Once again, he got up, but the third knock-down was the end.

For Paul, the win over Robinson is only his second fight of the career, suggesting that he might have a bright future ahead of him. According to the man himself, he has no plans of stopping, setting his goes much higher than before.

After the fight, Paul called out UFC legend Conor McGregor, vowing he would knock him out if the Irishman agrees to fight him.

Other Bouts on the Card

The same night, we saw another three fights, namely:

For more boxing news and fight previews, make sure to come back to VegasOdds!