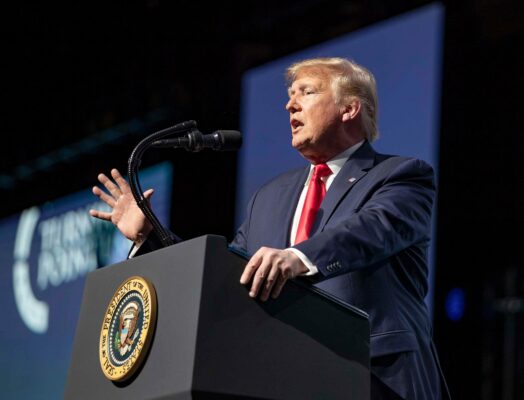 Will Donald Trump become president for the second time in 2024?

The opinion-splitting business tycoon turned political candidate, famously beat Hillary Clinton to become the 45th President of the United States of America back in 2017.

However, after losing out to Democratic rival Joe Biden in 2021, the 75-year-old now finds him facing a decision over whether or not to try and win back America’s most prestigious political seat again in 2024.

Although at the time of writing, it is still unconfirmed whether or not Trump will in fact run for President in 2024, statements made at recent public appearances have suggested that he may.

Speaking at the Republican donors’ event earlier this month, Trump, when asked whether or not he will consider leading the party to presidential victory admitted he is open to the possibility.

Donald Trump on the possibility of running for President in 2024.

Ahead of what looks to be a drama-filled two years, VegasOdds has all you need to know when it comes to the political betting markets, including the chances of Americans seeing ‘Trump’ flags waving for the second time in as many presidential terms.

Any Trump Family Member to Win the 2024 U.S Presidential Election

Vegas Odds Some of our talented contributors choose to remain anonymous but they help to comprise a talented team of writers at VegasOdds.com, bringing you sports news and headlines from different views and cultures across the globe, sharing the passion we all have for enjoying sports together.