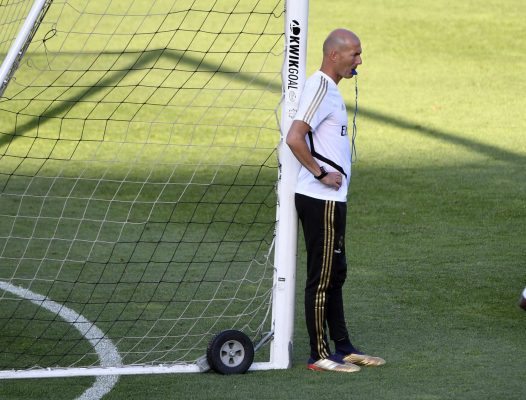 Real Madrid meets Inter Milan in the most interesting match of the UEFA Champions League this Tuesday. Los Blancos aren’t playing very well in this competition, and the same could be said for Inter. Instead of coming into this even with six points each, they have three combined. Things might become messy for the side that loses this matchup. It turned out that the competition in Group B is far stronger than anyone expected.

Where, When, and How to Watch Real Madrid vs. Inter Milan

A 4-1 win against Huesca is something that Los Blancos needed very much following a draw in Monchengladbach this midweek. Imagine a scenario where you go and beat Barcelona on the road in El Clasico, after two straight defeats, only to spoil everything against an average club in the UCL. Pretty frustrating for all the Real’s fans.

That is why a convincing victory against Huesca was very important. One other promising moment took place in that match, and that is Eden Hazard’s goal. The Belgian international was projected to be the heart and soul of this unit, yet he didn’t show a tinny bit of his capabilities. A 25-yard beauty against Huesca should push him forward a little bit.

This weekend’s match was the fourth straight for Real with both teams scoring and over 3.5 goals.

Conte Under Pressure While Inter Struggling

Just one win in the previous five games is something that bothers Inter’s board very much. Why? Well, they invested a lot of money into the current team, and it is expected from the same to make some notable results.

The first one would be to dethrone Juventus in the domestic championship, and the next one to reach at least the last eight in the UEFA Champions League. However, Inter lost in Derby Della Madonnina against Milan, then posted three draws against Borussia Monchengladbach, Shakthar, and the latest one against Parma in Serie A at home.

This puts additional pressure on Antonio Conte, who already had a clash with the management at the end of the previous campaign. What makes the situation now even more problematic is the fact that Romelu Lukaku might skip this event due to a thigh injury.

Inter is one of the rare teams to hold a positive record against Real in official matches. They have seven wins in 15 events, the Madridians posted 6, while two ended with a draw.

Inter is coming to Madrid to avoid a defeat, as they have a one-point edge over the rivals in the standings. Knowing Conte, in situations like this, counter-attacks and set-pieces are going to be Inter’s best chances for scoring. If Lukaku isn’t playing, he will be even more defensive-minded, with only Lautaro ahead and with a strong midfield in front of the defensive line.

Real, on the other hand, is not as flamboyant as before, and we can’t expect them to pressure the guests constantly throughout 90 minutes. Due to that, Zidane might order his unit not to rush out and go full speed from the first whistle, but to patiently wait for Inter’s mistake. Therefore, moderate efficiency, 2 or 3 goals is looking like the best possible solution.