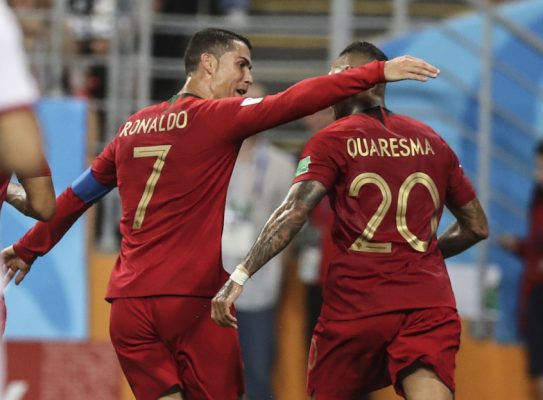 The biggest game of the week, in which Portugal awaits France, European champs vs. world title holders.

Portugal and France meet in the derby match of Saturday’s UEFA Nations League program. The reigning European and the current world champions will clash to decide who wins Group 3 of League A. But this is more than just a soccer game in the UNL, it is a battle of two sides whose recent head-to-head history is pretty turbulent, because Portugal not only won EURO 2016 in France, but beat the Gauls in the finals in front of their fans. Portugal also wants to show their power before the next continental championship, as pretty much nobody sees them among the top candidates for the trophy.

Where, When, and How to Watch Portugal vs. France

Portugal to Shut Down Doubters

Portugal was superb against Andora, packing seven goals into the net of one of the weakest football nations in Europe. Even so, their players boosted their morale with easy scores, with the note that both Cristiano Ronaldo and Joa Felix managed to hit the back of the net.

This was the 8th consecutive event for Selecao in which they haven’t lost. Furthermore, they haven’t allowed a goal in the past four.

When looking at the matches played in Portugal, the host nation has three wins and a draw in the most recent four events. The only game in which they haven’t triumphed was against Spain, 0-0, but two confident performances, one against Sweden, 3-0 and the other against the World Cup runners-up Croatia, 4-1, covered up that one.

France experienced a nasty slap in the face at home this Wednesday once Finland went home after a 0-2 win. Pretty much the entire world was shocked with this outcome, and this wasn’t the first time world champs did this to their fans.

The lineup against Finland wasn’t naive at all, with Pogba, Giroud, Kurt Zouma, etc. Yes, Martial, Griezmann, Kante, Varane, and others were brought in later, but still, a loss against a mediocre European selection is not acceptable now.

They would lose for the first time following seven games (6W, 1D). That single draw was against Portugal at home, 0-0, but there were some pretty ruthless victories in this recent stretch. Croatia on the road, 1-2, and at home, 4-2, Ukraine, 7-1, Sweden away from home, 0-1.

As mentioned above, the recent game in France concluded without any goals. In 2016, Portugal beat France 1-0 in the EURO finals, winning the title.

Overall, there have been 26 games between these two nations, with France winning 18, Portugal 6, and two ending without a winner.

Even though this is a spectacle that involves Ronaldo and Felix on one side, and Mbappe, Griezmann, and Pogba, on the other, don’t expect an appealing football. The result is the most important here, not the excitement or the esthetics.

Therefore, a moderate efficiency, meaning two or three goals would be the most realistic outcome. Neither side plans to attacks, but completely opposite, protect its own goal and look for the opponent’s mistakes.