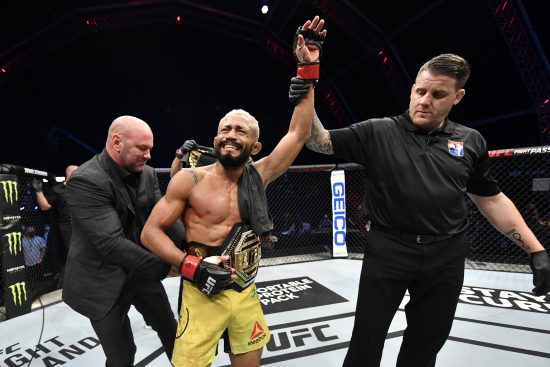 UFC 255 features a title match for the flyweight division, between the champion Deiveson Figueiredo and Alex Perez.

Figueiredo was set to face Cody Garbrandt in the headliner here, but the former bantamweight champ injured his biceps and had to pull out. The organization found the replacement pretty quickly, No.5 in the standings, Alex Perez, who was already preparing for this event, only to face another opponent. Perez had enough time to make preparations for the bout against Figueiredo, with the switch made more than a month ago.

This guy here is pretty underrated, and having him ranked 14th on the UFC pound-for-pound list isn’t matching the reality. Figueiredo has 19 wins and a single loss in his career, against Jussier Formiga, but after that, he went on to beat four in a row, and trash Joseph Benavidez twice in a recent couple of months.

The first time he beat the legendary American was by a knockout. The second was via first-round submission, and in both of these events, he was far better than the 36-year old legend who missed another chance to obtain the belt.

Figueiredo was projected to win the title the moment he entered UFC, immediately showing devastating power for one flyweight fighter. In eight wins over his UFC rivals, six came after a stoppage. The intensity and the anxiety he brings in the octagon is enormous, and according to many, this guy will extend the tradition of the flyweight division that sees its champions reigning for a long time.

This might be strange to hear, with the American racking up 29 fights in his 28 years. Yet, we’ll explain our thinking in the next couple of lines.

Perez was set to meet Brandon Moreno also at the UFC 255, in what was an unofficial title-eliminator. Before that fight, he trashed Jordan Espinosa and Jussier Formiga (the only guy who beat Figueiredo) via first-round stoppages. Many experts are suggesting that the bout against Moreno would psychologically mean a lot for Perez. He would not only see what it is like to fight under pressure, but also gain the experience of encountering a guy with a similar hunger like his.

Perez is a fighter with a huge tank, who likes to collect points instead of going for finishes. Twelve of his 24 victories came after a decision, and he has just one loss in such a situation. So, the deeper the fight goes, his chances are rising.

The God of War is an incredible machine, and with all due respect towards Perez and his accomplishments, we simply don’t see how he might avoid this loss. His chin was cracked against Benavidez some two years ago, and imagine what Figueiredo will do to him after rolling over that same opponent twice in the last nine months.