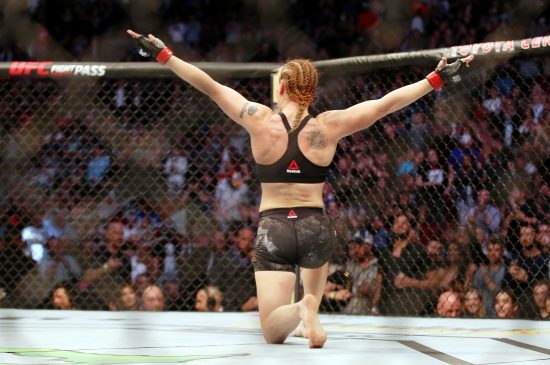 Valentina Shevchenko will defend her UFC flyweight title against Jennifer Maia this Saturday, at the UFC 255.

Coming in as an absolute favorite in this bout, Valentina Shevchenko is expected to extend her reign in the flyweight division. However, Jennifer Maia has plans of her own, with the Brazilian aiming to make a colossal sensation. Of course, that is easier said than done, especially in this case, with one of the most dominant fighters of all times across the ring. In the next few paragraphs, you may find lots of interesting stuff about the upcoming fight, so take five minutes of your time to read and study this article.

Where, When, and How to Watch Valentina Shevchenko vs. Jennifer Maia

Before the Kirgystani-Peruvian fighter, we haven’t seen a successful title defense in the flyweight division. Now, she might retain the title for the fourth straight time, and that pretty much says everything about her domination. Shevchenko beat Joanna Jedrzejczyk at the UFC to take the belt, and after that, posted three pretty convincing wins.

The first was a spectacular head kick KO vs. Jessica Eye, arguably one of the best ever finishes in the ladies’ competition. After that, the “Bullet” defeated Liz Carmouche by unanimous decision, before trashing Katlyn Chookagian via TKO early on this year.

Shevchenko currently doesn’t have a match in this division, and there isn’t a challenger that might match her versatile technique and relentlessness. The only two defeats in the UFC she experienced were in bantamweight against Amanda Nunez, both after decisions. The second one was after a split, and it caused many controversies, with a vast number of fans accusing the judges that they stole the win from Shevchenko.

The former Invicta FC flyweight champion isn’t quite convincing since arriving in the UFC. She would lose against Liz Carmouche in her debut after a unanimous decision, posting one more defeat later one, against Chookagian, also via unanimous decision.

The Brazilian is predominantly a boxer, and her primary weapons are strong punches. She rarely tries to score a takedown or goes for a submission. Also, Maia lands a solid number of significant strikes per minute, 4.08, but she allows too many of the same, 3.96 p/m, meaning that she isn’t some shiny defender and tactician.

This is a no-brainer. Shevchenko is far better than her rival, and anything but an easy win here would be a surprise. Maia had troubles against fighters who easily lost to the champ, and that tells a lot. It is quite possible to see the “Bullet” producing another spectacle finish, like so many times before.