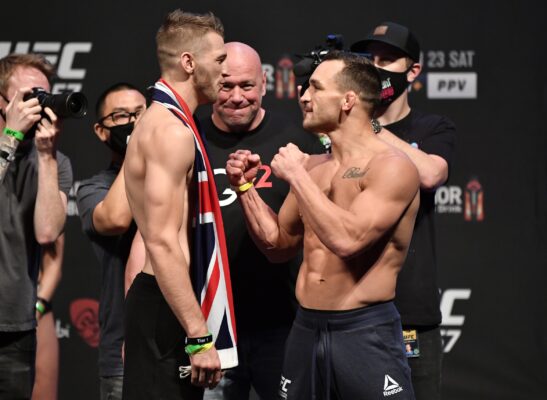 Although not the most exciting match-up on paper, I do expect to see a fairly decent contest played out between these two ladies.

The pair’s contrasting form could not be more evident with Rodriguez failing to win in her last two fights and Ribas currently tearing the division up.

Ribas, who by her own admission is totally free of injury, is on a brilliant five fight win streak which includes a submission win over UFC sweetheart Paige Van Zant and a hard-fought decision win over Mackenzie Dern.

I can’t see past the talented South American in this one. I believe Ribas’ all round game will prove to be too much for her opponent and compatriot to handle.

Ribas to win via decision.

Making his third appearance in the UFC, Muradov, who is on an impressive 13 fight win streak will be looking to extend his run as he seeks to break into the division’s top 15 rankings..

With a whopping 16 knockout wins to his name, Muradov is likely to cause Sanchez a world of problems.

Sanchez, who will be looking  to put back-to-back victories together after claiming a recent win over Wellington Turman will need to be at his very best come Saturday night.

Sanchez has lost five professional fights with 60% of those defeats coming via knockout. With that being said, I wouldn’t be surprised to see Muradov lean on his striking power in an attempt to pile the misery on his opponent and make it six.

Muradov to win via KO/TKO.

Both of these flyweights come into their match-up at UFC 257 in inconsistent form having both won just once in their last three fights.

In what appeared to be a decent comeback after suffering a devastating head kick knockout against the division’s champion Valentina Shevchenko in 2019, Eye has since struggled to string back-to-back victories together.

Elsewhere, Scottish pocket-rocket Calderwood will be desperate to bounce back after suffering a recent submission loss at the hands of Jennifer Maia.

Despite both women in need of getting their hand raised, the fight is exceptionally close to call which is reflected by the dead level betting odds.

With Eye having the very slight advantage when it comes to experience it would not be unreasonable to suggest the American fighter will draw upon all her Octagon know-how to see off Calderwood.

The safest bet is seeing the fight go the distance, however at such low odds, there really is little value in that market, so i’m tipping an Eye win via decision win.

Eye to win via decision.

After making the long-awaited step-up from second-tier promotion Bellator, ‘Iron’ Chandler will be thrusted into the UFC’s limelight when he faces Dan ‘Hangman’ Hooker in UFC 257’s co-main event.

Having ended his last three fights in devastating knockout fashion, Chandler will be confident he can continue the same run of form going into the big leagues.

However, seeing off his notoriously tough opponent from New Zealand will not be an easy task.

Hooker has not been finished in over two-years, with veteran kickboxer Edson Barboza the last man to knock him out.

Saturday night’s co-main event has some serious potential to be awarded with the evening’s ‘Fight of the Night’.

In what is a dream stylistic match-up, I fully expect to see this bout result in an all-out bloody war with Hooker narrowly edging it on the judge’s scorecards.

Hooker to win via decision.