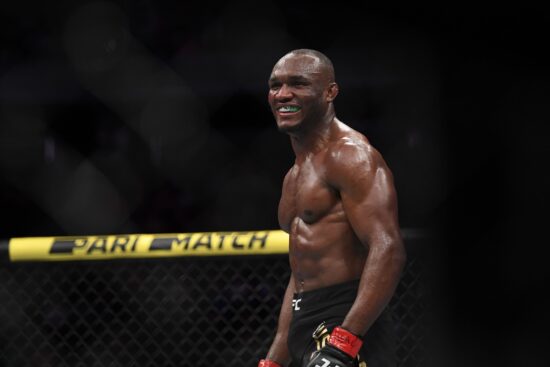 Kamaru Usman is still the UFC welterweight champion after defeating the challenger, Gilbert Burns, via third-round TKO at the UFC 258.

With 13 straight wins, the Nigerian Nightmare currently has the second-best UFC start, tied with Khabib Nurmagomedov. The only one better than these two masters is Anderson Silva, who would win his first 16 bouts in the organization. However, judging by the way Usman performs, that record is endangered.

Kamaru started slow, but eventually smashed his former training partner, now challenger, Gilbert Burns. After being dropped in the first round, surviving a scare, the champion pulled himself and started doing his usual routine, and that is going forward and throwing jabs.

The result of that all was Burns hitting the ground pretty quickly, and after that, him being visibly shaken and damaged in the second round. Furthermore, Usman regained his confidence and started sending more and more jabs and strikes, constantly hurting the rival.

Eventually, with 34 seconds in the third round, the Nigerian Nightmare seized the opportunity to finish the match. He came after Burns, who was already on the ground, to deliver several devastating punches and mess up his face. There was no other option for Herb Dean but to stop the contest.

While Usman celebrated yelling all over the octagon, Burns was overwhelmed with emotions, crying in the middle of the ring, due to a wasted chance, arguably the biggest one in his professional career. He will have to get back to the gym and work even harder in order to have another shot at the title.

As for Kamaru Usman, he already called out the name of his next wish – Jorge Masvidal. The two fought last summer, but that one was after Gamebred accepted a short-notice offer to step in and replace Burns, who was tested positive for COVID-19 at the time. Usman won the match via unanimous decision. Per Dana White, this match has no obstacles to happen. The only on who might be against it is Leon Edwards, the Brit who waits for his chance to attack the title for a long time and is currently, the No.3 in the division.

This is a big deal for Gastelum, who faced many doubts before tonight’s event, some of them considering his future in the UFC and whether the American deserves to be in the most prominent MMA organization at all. However, after a very good performance against Heinisch (14-4 MMA, 3-3 UFC), the former interim middleweight challenger proved that there is still a place for him in the organization.

We’ll see what Dana White has planned next for Gastelum, who didn’t hide his joy after the match.

Alexa Grasso (13-3 MMA, 5-3 UFC) would also post a big win, which makes her one of the top flyweights at the moment, and a possible title challenger in the near future. The Mexican defeated Maycee Barber (8-2 MMA, 3-2 UFC) via unanimous decision, with all three judges scoring 29-28 in her favor.