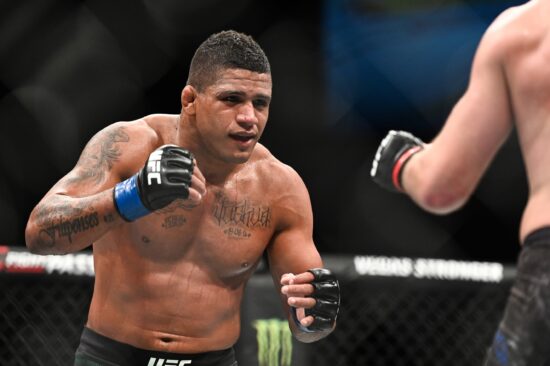 The UFC’S Apex Centre is set to host UFC 258, the second numbered card of the year, in what should be a weekend of all-out action-packed violence.

Elsewhere, this weekend’s co-main event will see women’s flyweights Maycee Barber and Alexa Grasso go toe-to-toe in what should be three-rounds of female war.

Capping off what should be an excellent evening’s entertainment, is a title match-up between two fighters who are widely regarded as the two best 170lb’ers in MMA at the moment.

Training partners Kamaru Usman and Gilbert Burns are set for an epic showdown in what will undoubtedly be a gruelling encounter.

This article assesses each match-up and predicts which fighter will be the one to have their hand raised.

Both these middleweights will be looking to get back to winning ways.

Marquez has an array of vicious knockouts to his name, ‘The Cuban Missile Crisis’ should add another this weekend.

Prediction: Marquez to win via TKO/KO.

This fight has potential to go the distance in what should be a slug-fest.

Both fighters are exceptionally experienced but with Rivera having almost as many decision wins (17) in his career as Munhoz has wins combined, my money is on ‘El Terror’ to take the judge’s scorecards.

Prediction: Rivera to win via decision.

One of the stand-out fights on this Fight Night’s main-card.

Gastelum has not won a fight since being involved in one of the fights of the decade when he faced champion Israel Adesanya back in 2019.

Currently, on a three-fight losing streak, Gastelum will be desperate to stop the rot in its tracks when he meets ‘The Hurricane’ at UFC 258.

Both fighters are notoriously tough, I wouldn’t be surprised to see it go all three rounds with Gastelum doing just enough.

It should be close though.

This all female 135lb match-up is ridiculously tough to call.

Barber is one of the very few female flyweights who has genuine finishing power, however, Grasso has never been knocked out.

The fight should stay on the feet with both ladies going toe-to-toe for the duration.

Prediction: Grasso to win via decision.

This weekend’s main-event has all the makings to be one of the division’s best-ever bouts.

The fight’s added spice comes from the fact both fighters have a history of training together and genuinely get along well.

However, once those cage doors open, all bets are off and both men will undoubtedly be looking to lift the title.

Champion Usman is widely accepted as the best welterweight on planet earth. ‘The Nigerian Nightmare’ hasn’t lost a fight since 2013 and has already successfully defended his title on two different occasions.

Burns is on an equally devastating run though. The 170lb Brazilian has claimed recent wins over veteran and BJJ specialist Demian Maia and former champion Tyron Woodley.

This title fight is very tough to call with both fighters having the required skill sets to beat the other in spectacular fashion.

If this fight goes the distance, it should be a third title defence for Usman.

However, sleeping on Burns’ all-round game would be a mistake with the South American capable of getting the win in many different ways.

Prediction: Usman to win via decision.