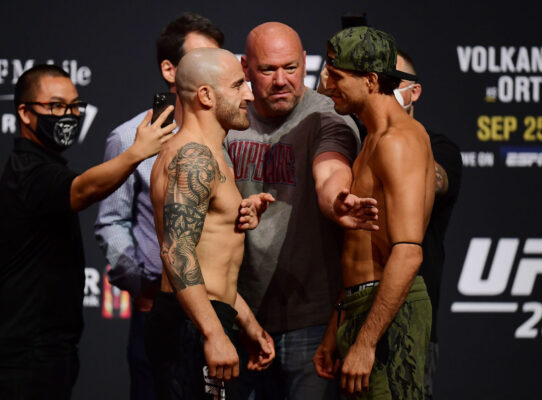 The UFC returned to a sold-out T-Mobile Arena on Saturday night for arguably the promotion’s best pay-per-view of the year. The event’s full results, including performance bonus payouts, are below.

13 fights stacked out a hugely exciting fight card, including two title fights as well as the long-awaited return of cult-favorite Nick Diaz, who rematched Robbie Lawler, 17 years on from their first encounter.

The event could not have started better after Matthew Semelsberger knocked Martin Sano out in just 15-seconds of the very first round.

The rest of the Prelims were then followed by four more finishes – setting up a truly mouth-watering Main Card.

UFC 266 was co-mained by women’s flyweight champion Valentina Shevchenko, who took on Lauren Murphy in what was the Kyrgyzstani’s sixth title defense.

Speaking to the UFC ahead of her latest fight, the pound-for-pound great said: “I’m here to perform in the best way that I can and to have the life that I want. In every single fight, I want to show the best of me, the best martial arts, the best technique.

“That’s why I am preparing for it very seriously. I’m not taking any fight as it being an easy fight. I know it’s going to be a hard fight, that’s why I train harder to make it easier. That’s my philosophy and approach to the fight.”

Elsewhere, the top of the card was headlined by fierce rivals Alexander Volkanovski and Brian Ortega which showcased arguably one of the best rounds in UFC title fight history.

Round 3 between Volkanovski and Ortega saw the champion nearly finished on the ground twice before rallying to come back and execute some vicious ground and pound. Referee Herb Dean was forced to seriously consider stopping the bout but allowed the bell to sound before both men hobbled back to their corners.

Fight of the Night: Alexander Volkanovski vs. Brian Ortega ($50,000 each)