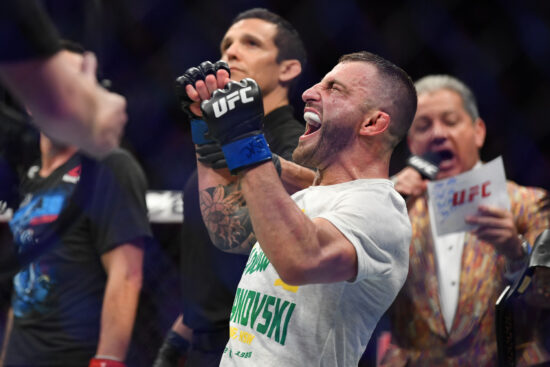 This weekend’s UFC is set to be one of the best cards of the year.

14 fights are scheduled to place across a jam-packed card which includes several high-profile mixed martial artists all on display.

Standout bouts include a feature Prelim bout between former bantamweight title challenger Marlon Moraes and Merab Dvalishvili, as well as fan-favorite and veteran Nick Diaz, who will be returning after a six year-long layoff to face ‘Ruthless’ Robbie Lawler.

The top of the Main Card is likely to draw the most attention though as two title fights to cap off what is certain to be a hugely exciting evening of fighting entertainment.

Pound-for-pound queen Valentina Shevchenko is looking to defend her flyweight title for the sixth time when she faces next-in-line Lauren Murphy.

Elsewhere, ‘The Ultimate Fighter’ judges and clear rivals Alexander Volkanovski and Brian Ortega will be squaring off for the chance to become the UFC’s featherweight champion.

Currently reigning supreme over the 145lb division, Aussie-born striker Volkanovski will be hoping to defend his title for the second time with a win over number two ranked contender, Ortega.

Looking to get back to winning ways following a recent loss against Katlyn Chookagian, Cynthia Calvillo will be focused on bagging one of the biggest wins of her career against former champion Jessica Andrade.

I expect this one to be a bit of a brawl with the American narrowly edging her South American opponent.

Hoping to get back into the win column following a devastating loss against Derrick Lewis, contender Curtis Blaydes will be looking to extend his professional record to 15-3.

Beating the notoriously tough Jairzinho Rozenstruik won’t be an easy task though. Regardless of that though, I expect Blaydes to utilize his superior ground game and end up convincing the judges across all three rounds.

Having last fought nearly seven years ago, Diaz, who forms one-half of the famous Diaz brothers, will be looking to make a memorable comeback.

This one is exceptionally tough to call, partly because it’s impossible to tell what kind of shape the American will return in, but also because even though Lawler is on a dreadful four-fight losing streak, you can never completely count ‘Ruthless’ out.

Seemingly being fed into the lion’s den, not many fight fans will be backing Murphy to pull off what will arguably be one of, if not, the biggest upset in professional mixed martial arts history.

Looking to defend her title for the sixth straight time and with virtually no weaknesses in her game – I know where my money is going.

Following what will undoubtedly be a great card from top to bottom, all roads will inevitably lead to the main event.

In light of their fierce rivalry, which has been amplified by their roles on the latest season of ‘The Ultimate Fighter’, top featherweights Alexander Volkanovski and Brian Ortega will throw down for the chance to be crowned the division’s king.

Having held the title since his 2019 win over Max Holloway, Volkanovski will be confident he can pull off a striking masterclass to dismantle ‘T-City’ and in turn dish out the second title fight defeat in the American’s career.