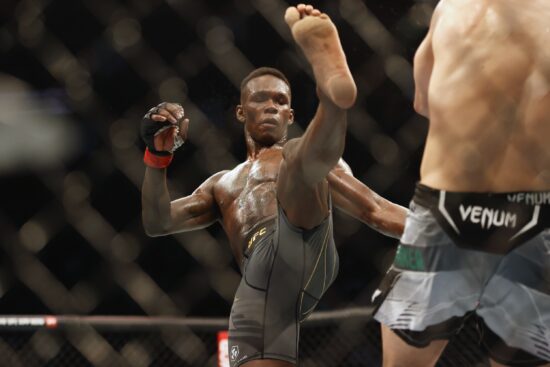 The fact that Israel Adesanya is third in the UFC pound-for-pound rankings explains why his top MMA sportsbooks see him as a huge favorite in Saturday’s fight.

The New Zealander has a professional record of 22-1, with his only loss happening in a UFC Light Heavyweight title bout against Jan Blachowicz last year.

Adesanya’s opponent at Saturday night’s UFC 276 will see him take on Jared Cannonier. Although Cannonier poses several threats, ‘Izzy’ is expected to improve his record and in turn, retain the middleweight title he has held since 2019.

Adesanya has defended his title four times already, beating Yoel Romero, Paulo Costa, Marvin Vettori, and Robert Whittaker. His fifth title defense is against Jared Cannonier, a former light heavyweight fighter who’s been superb since switching to middleweight. The Killa Gorilla is 15-56 overall, with a 5-1 record since moving to the UFC middleweight division.

Israel Adesanya vs Jared Cannonier Tale of the Tape

Israel Adesanya is the best fighter in the middleweight division at the moment, meaning that if he failed to defend his title on Saturday, it would be the biggest UFC upset in recent years. It seems that the real question isn’t whether Izzy will win this fight but how?

Even though he’s won most of his fights by knockout, most of his recent bouts went the distance. In fact, three of his middleweight title defenses happened by points. We think it’s very likely the same scenario will play out this Saturday.