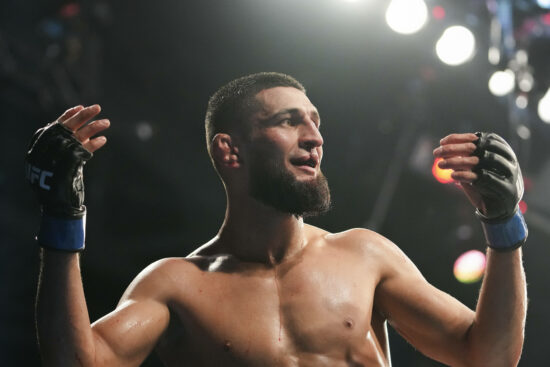 If you’re in search of some UFC 279 predictions, look no further because Vegas Odds has you covered!

*PLEASE NOTE – THREE FIGHTS ON THE MAIN CARD HAVE CHANGED*

Following on from last weekend’s incredible UFC Paris Fight Night, which not only saw a banger of a headline heavyweight fight between Ciryl Gane and Tai Tuivasa, but it also saw us smash the oddsmakers. If you read up on our UFC Paris prop bet preview, you may have followed our tip and backed Gane to win in the fight’s third round, and if you did, you’re a fair few dollars richer today!

Anyway – UFC Paris is the past and all focus is now on this weekend’s UFC 279. An exciting pay-per-view event between Khamzat Chimaev and legend Nate Diaz is scheduled to take place live from the T-Mobile Arena in Las Vegas on Saturday, September 10, 2022.

There are 13 bouts set to take place across the event’s Early Prelims, Prelims, and Main Card, so without further ado – let’s get to it!

UFC 279: How to Watch and Start Times

This is a really tough matchup for Nate Diaz. Perhaps the hardest of his career.

Khamzat Chimaev is on a tear. Not only is the Swedish grappler unbeaten in his professional mixed martial arts career (11-0), but he has also stormed his way through all five of his opponents in the UFC, including previous title challenger Gilbert Burns.

As the Vegas odds reflect, it is really hard to see any outcome other than a Chimaev win, in fact, we expect Saturday night’s main event to be so one-sided that it could even end within the first five minutes.

Failure to win this weekend is likely to see Tony Ferguson cut from the UFC.

The 38-year-old is on a disastrous four-fight skid, which has included an absolutely brutal knockout against Michael Chandler, and even though he will always be considered a legend among fight fans, when it comes to trying to get the best of China’s Li Jingliang, we really fear for ‘El Cucuy’ in this one.

We think Ferguson’s best chance of victory could come on the ground, especially considering Jingliang has conceded 17 of the 43 takedowns he has faced.

However, failure to get the fight to the ground and lock in a submission, Ferguson could be in for a tough night at the office.

Given the fact this fight is scheduled for just three rounds, as well as taking both fighter’s insane durability into consideration, we wouldn’t be surprised to see this one go the distance.

Kevin Holland’s matchup against Daniel Rodriguez is set to be at 180 pounds and this will probably favor the latter.

This is a very even fight though. Both of these guys are riding three-fight unbeaten runs but Holland has looked best since dropping down from middleweight to welterweight so Saturday night’s 10 pounds increase in weight could serve as a major disadvantage for the Phalanx MMA Academy graduate.

Not only will weight be a major factor in this one, but Rodriguez also boasts the better striking statistics.

The 35-year-old lands 8.2 strikers per minute, which is over double Holland’s number. Not only that, but Rodriguez also has the better record when it comes to fights being on the feet and at distance.

If this one stays on the feet and Holland is unable to target his trademark submission attempts, we wouldn’t be surprised to see the dog prevail.

Oddly, both of these females’ recent records are virtually identical. Although both ladies will come into Saturday’s matchup off the back of victories, they’re both prone to inconsistencies.

Given how razor-thin this one is to call and the fact there isn’t much between either bantamweight, we’re going to back Aldana purely due to her superior ability to finish her opponents.

Ultimately though, we would advise extreme caution if and when betting on this one.

What a way to open Saturday’s Main Card.

Fan-favorite Johnny Walker will be desperate to get back into the win column after suffering back-to-back defeats against Thiago Santos and Jamahal Hill.

Cutelaba will also be eager to pick up a win. Even though the Moldovian’s recent record isn’t as bad as Walker’s, he has only picked up one victory in his last three outings (1-1-1).

Nevertheless, regardless of which light heavyweight comes away with their hand raised on Saturday, one thing is almost certain – expect fireworks early on and a possible finish from either fighter.

Between them, Walker and Cutelaba boast a whopping 27 knockout and four submission victories, so it is fair to assume that one of these guys will be going to sleep this weekend.