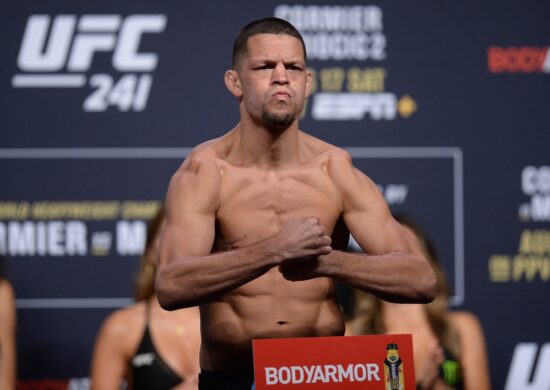 The shuffle Dana White made before UFC 279 is one of the most interesting things the MMA community has seen in the last few years. The main card looks completely different than planned, with the main event now set between Nate Diaz and Tony Ferguson.

Nate Diaz (20-13) was quiet and was aside all the “action” that happened this weekend. Apart from that one altercation his team had with Chimaev (in which they weren’t the main protagonists), the veteran was calm and OK.

Nate was 170.5 pounds during the weigh-in, while on the other side, Chimaev appeared at 178, and the American declined the possibility of meeting the Russian, whose missed weight caused all the problems. Instead, El Cucuy jumped in, providing us with a fantastic spectacle.

Nate is 37 years, without endurance and stamina like before, and above all without speed, but still with rock-solid hands and chin. We’ve seen him eating quite a few massive hits against Leon Edwards and still maintaining his balance before catching the now-champion off guard, and rocking him. If Diaz went for a finish, he might have even won that bout, but he wanted to be a gangster, making fun of Edwards. Which was fun, we have to add.

El Cucuy Coming Back on Track or Sinking Even Lower

Another fan favorite, Tony “El Cucuy” Ferguson (25-7), is on stage here. One of the most dominant lightweights of his time moved up, trying to sort out his career. Ferguson experienced four straight losses in the previous four bouts, the latest against Michael Chandler, who KOd him with a front kick, making a highlight-reel move.

Ferguson is also a veteran, having 32 bouts behind and 25 wins, of which 12 via KO and eight by submission. He has been one of the most devastating punchers in the division, primarily due to his long reach and vicious elbows. Also, El Cucuy had a steel chin, eating punches just a few people would do.

However, his gas tank and overall physical shape weren’t at the highest level over the recent few fights. He was inferior against Beneil Dariush, while Chandler caught him sleeping while delivering that KO.

Diaz and Ferguson will have a similar reach here, and the thing which excites us the most is that we are going to have an open and attractive match between two gangsters who aren’t afraid to eat a few punches in order to reach their goal. Our pick is Diaz because he wrestles and grapples better than Ferguson, and at some point, he could drag him to the ground. Also, his endurance looked better recently than Ferguson’s.