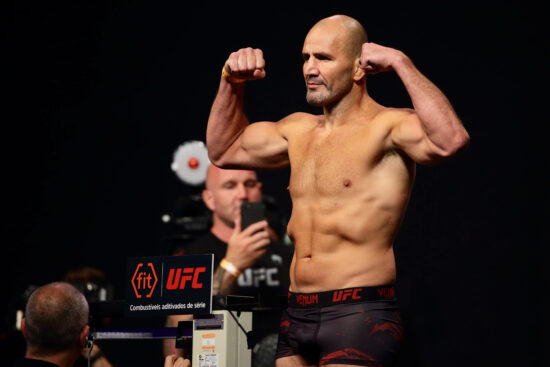 Looking for a UFC 283: Teixeira vs Hill prediction? – Look no further because Vegas Odds has you covered.

Some seven months after losing his UFC Light Heavyweight title to Jiri Prochazka, Glover Teixeira has a chance to get it back. Originally, the Brazilian veteran was supposed to fight Prochazka again, but the Czech had to vacate his title due to an injury. Teixeira was preparing for that fight for months, but he’ll now have to face a different opponent in the fight for the championship belt – Jamahal Hill.

Luckily for Teixeira, Hill hasn’t had too much time to prepare for the fight as he was originally meant to fight in March 2023. Does this mean Teixeira has an edge over his opponent? Oddsmakers don’t think so; they see Hill as the favorite in the main event of UFC 283.

We, however, think they might be wrong, and to learn why, just keep on reading!

Jamahal Hill is favored by the bookies to become the new UFC Light Heavyweight champ probably because he’s 12 years younger than Teixeira. He also has an impressive fighting portfolio with an 11-11-1 record and three awesome finishes in his previous three UFC fights. However, we suspect that’s not enough to win against Teixeira.

The Brazilian is fighting on his turf against the kind of opponent he’s been preparing to fight for months. You can think of Hill as a slightly weaker version of Prochazka. He’s a great boxer with decent takedown skills, but he just isn’t good on the floor.

Meanwhile, Teixeira is a submission artist who also knows how to throw strong, precise strikes. The Brazilian is the UFC Light Heavyweight record holder for most submission wins, as well as for the most finishes in this weight class.

He’s also the UFC’s oldest first-time champion, which he won by submitting Jan Blachowicz in October 2021. Teixeira failed to defend his title against Prochazka, but no one can say he wasn’t close to getting the job done.

Actually, he was only half a minute away from defending his title in a fight in which he made five takedowns. Unfortunately for him, a tiny mistake cost him the title. Still, we doubt the same can happen again.

Hill is a striker with decent BJJ skills; Teixeira is a Brazilian Jiu-Jitsu expert who’s got fists of steel. Hill’s road to victory in this fight is to knock Teixeira out, but for that, he’ll need to stay on his feet. Although his takedown defense is 65%, we doubt it will matter much against the Brazilian takedown maestro.

We think it’s very likely Teixeira will take Hill down multiple times on Saturday. But will he submit him on the floor? That scenario seems likely to us, but we’re even more certain the fight will end within the distance – whether Hill wins by KO/TKO or Teixeira wins by submission.

Teixeira is fighting in front of his crowd against a fighter who’s ranked 7th in the division and who hasn’t had too much time to prepare. That said, we can see no other scenario other than the Brazilian winning back his UFC Light Heavyweight belt back.