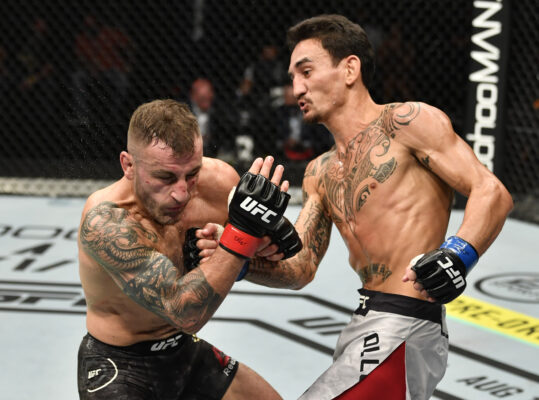 Following what was arguably one of the best title fights in the promotion’s history, Volkanovski, who claimed a unanimous decision victory over Ortega, has admitted he already has eyes on a third title defense.

Speaking to reporters (as quoted by MMA Weekly) after UFC 266’s event, the dominant Aussie hailed top contender and former champion Max Holloway, who is set to take on Yair Rodriguez on November 13, 2021, as per ESPN’s Brett Okamoto.

Max, I guarantee you he doesn’t have to take this fight [with Rodriguez to get a title shot]. And he’s still going to go take it.

He wants that number one spot. He wants to earn it. It shows you what type of guy he is.

How can you not respect that?

That’s exactly what I’d f**king do. You’ve got to give him respect.

Volkanovski has already faced off against Holloway twice and come away victorious on both occasions – although their second fight is still heavily debated with many fight fans believing Holloway did enough to reclaim his title.

Despite his previous title shortcomings, there is very little debate surrounding who, in the 145lb division, poses the biggest threat to the Aussie’s title reign.

Ahead of Fight Night: Holloway vs. Rodriguez later this year, which is certain to decide Volkanovski’s next title challenger, the champ has predicted which fighter will be the one to see their hand raised.

How do I think that fight’s going to go?

Yair Rodriguez, he’s a great fighter. Stylistically, I think Max is a nightmare for him.

I’m expecting Max to go out there and do his thing and we’re going to be rerunning that trilogy and Dana’s gonna pay us good money for it.

Alexander Volkanovski on the winner of Max Holloway vs. Yair Rodriguez.

Holloway vs. Rodriguez: What the Oddsmakers are Saying

Ahead of November’s Fight Night between Holloway and Rodriguez, which is set to be a striking masterclass, online oddsmakers have been quick to weigh in on which fighter they expect to secure the next featherweight title shot.

Although Rodriguez will come into this bout on a three-fight unbeaten run, the oddsmakers don’t fancy his chances when he comes up against former champion Holloway.

Hawaiian-born boxer Holloway has opened as the fight’s overwhelming favorite, which is perhaps no surprise considering how impressive he was during his most recent winning performance against Calvin Kattar.

Looking to cement his place as the division’s outright number one contender as he continues on the road to reclaiming the title he successfully defended three times before losing to Volkanovski in 2019, Holloway will be hoping to put on another impressive performance against Rodriguez.