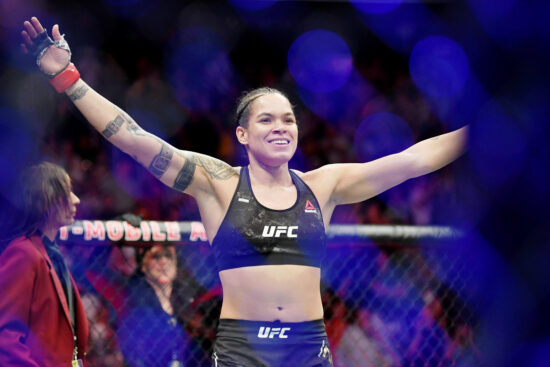 The Brazilian queen is set to take on Julianna Pena at UFC 265 in August.

Since arriving in the big leagues, the South American striker has gone on to become the undisputed GOAT of women’s mixed martial arts.

Racking up an eye-watering 14 wins and two titles in the last eight years, there is no denying that Nunes is heading for Hall of Fame status.

Following what has been a hugely dominant few years, Nunes, who currently holds both the bantam and featherweight titles, has left fans wondering how long she’ll compete for before considering retirement.

After claiming famous wins over the likes of Valentina Shevchenko, Miesha Tate, and Cris Cyborg, it’s fair to say that the ‘Lioness’ has nothing left to prove.

However, seemingly determined to cement her place even further among the sport’s greatest, Nunes appears to be showing no signs of slowing down.

Following Nunes’ most recent win over Megan Anderson at UFC 259, fellow bantamweight contender Pena was quick to take to her social media and demand a shot at the 125lb title.

Given the fearless nature of her call-out, UFC president Dana White shocked fans by honoring Pena’s request and secured a main-event title bout later this year.

Despite granting her next opponent their wish, Nunes is clearly expecting a familiar outcome.

Speaking recently to MMA Junkie, the 33-year-old, when quizzed about Pena’s overwhelming confidence, revealed that while she admires her opponent, she does not plan on losing her belt.

I love that. Those kind of girls bring the best of me in the cage. I love what she did. She got it. I’m happy for her, and we’re going to see each other soon.

I know she don’t have nothing to lose, so I’m still ready.

Nobody is going to take this from me.

I’m going to become a lion inside the cage, and no one is going to take that belt from me.

After learning she will fight for the bantamweight title next, Pena has been very vocal in predicting her grappling game will be too much for Nunes to handle.

However, Pena isn’t the first of Nunes’ title challengers to say that.

While Nunes is best known for hitting like a truck, her ground game, at times, does go unnoticed.

The Brazilian’s last bout saw her make light work of a much larger, much rangier Anderson before tying her up on the ground and eventually forcing her to tap out due to a reverse triangle armbar.

Addressing Pena’s grappling warning, Nunes expects the American to be eating her words come the end of UFC 265.

All my opponents, it’s the same thing.

Since I get this belt, they say the same thing. None of them has been able to stop me. She’s going to be the next. She’s not going to stop me with her wrestling. I promise you.

We’re going to do interview again like, ‘I told you. She’s not stopping me.’ I will defend, and I will take her down, and I will finish her on the floor.