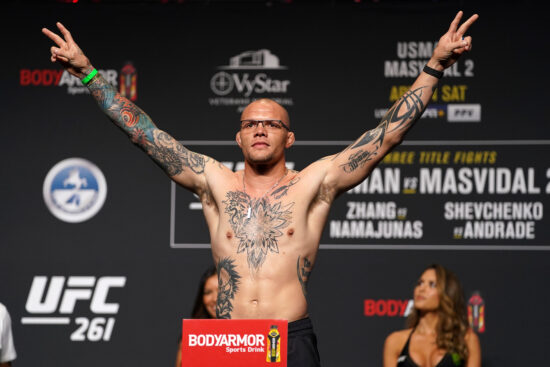 Ahead of his comeback fight against Leon Edwards at next weekend’s UFC 263, Nate Diaz has received some praise of the highest order from an unlikely source.

Light heavyweight Anthony Smith has recently taken the time to hail Diaz, who has not fought since his loss against Jorge Masvidal in November 2019.

Since arriving in MMA’s big leagues, the Stockton-native has grown to become one of the most prevalent figures in the sport to date.

Boasting an overall record of 20 wins and 14 losses, Diaz’s career has seen him compete against the likes of Donald Cerrone, Rafael Dos Anjos, Michael Johnson, and Anthony Pettis.

However, despite his huge list of opponents, Diaz is best known for his fighting saga against Irish superstar Conor McGregor.

The pair, who fought twice during 2016, have now both claimed victories over one another, with Diaz’s first bout underdog win cementing itself among the sport’s most revisited moments.

However, after going on to lose the rematch against McGregor, Diaz then went on to beat ‘Showtime’ Pettis before most recently getting knocked out against ‘Gamebred’ Masvidal at UFC 244.

Having not been back in competitive action since Diaz is finally preparing to return to the octagon where he will take on rising English star ‘Rocky’ Edwards at UFC 263 next weekend.

UFC 263, which is set to take place at the Gila River Arena on Saturday, will see the promotion sanction a never-before-seen scenario.

Although Diaz vs. Edwards is a hugely exciting match-up, it is not booked as the event’s co-main, or main-event – with flyweight champion Deiveson Figueiredo vs. Brandon Moreno and middleweight champion Israel Adesanya vs. Marvin Vettori already occupying those spots.

In addition to this, with neither fighter currently holding the welterweight belt, Diaz vs. Edwards is a non-title fight.

Currently, there has never been a five-round fight take place which is not either a title fight, or a co-main or main event.

President Dana White recently confirmed his decision to make the enthralling match-up a pioneering five-round fight, with the American promoter suggesting that both fighters were advocates for a 25-minute brawl, opposed to just 15-minutes.

Fight fans will agree too – the contest, on paper, is just too good not to.

So that’s that then – win or lose on Saturday, Diaz, like many other times throughout his career, will be remembered for making history, once again.

Although currently competing at two totally different weight classes, Smith, who is a natural light heavyweight, has recently admitted that he is a big fan of his welterweight peer.

In fact, so intrigued by Diaz’s fighting style, Smith has admitted he’d happily pay for the pleasure of watching the 36-year-old compete.

Speaking recently on the UFC Vegas 28’s post-fight show (as quoted by BJ Penn), ‘Lionheart’, who is often known for displaying similar ‘do-or-die’ traits as Diaz, has revealed he loves watching the Cali-born brawler.

It doesn’t matter what Nate Diaz is doing. If he is cooking, I’m tuning in and I’m going to watch it.

And I’ll pay pay-per-view money to do it!