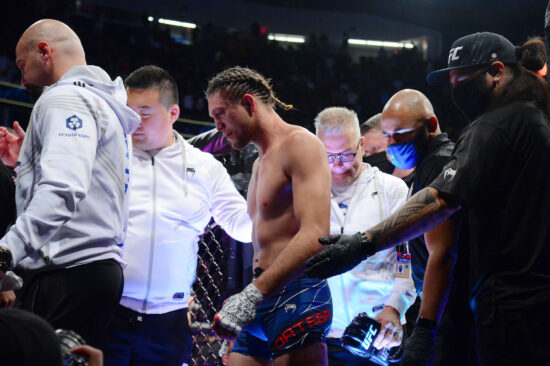 Following his loss on Saturday night in UFC 266’s main event, which turned out to be a strong ‘Fight of the Year’ contender, to featherweight champion Alexander Volkanovski, challenger Brian Ortega has broken his silence on how tough his opponent is.

Ortega and Volkanovski ended up going the going distance in what was an absolute banger.

However, despite how dominant Volkanovski ended up being on the judge’s scorecards, round three of the fight showcased arguably the best five minutes in mixed martial arts history.

Seemingly in control of the fight, Ortega stunned Volkanovski by landing a straight left and instantly locking up a guillotine choke.

A sold-out T-Mobile Arena watched on as the champion turned purple and appeared to be on the brink of losing his belt, however, somehow, down to sheer grit and determination, Volkanovski refused to tap and eventually ended up forcing his way out.

Moments later Ortega was able to lock up a triangle choke but Volkanovski ensured the same outcome.

The stunning back and forth will undoubtedly be replayed for many, many years to come and despite coming up short, Ortega has admitted that he thought he’d done enough at the midway point of round three to be crowned the new king at 145lb.

Speaking recently to reporters (as quoted by MMA Junkie), the American hailed Volkanovski’s toughness and confessed he wasn’t expecting him to be able to survive round three of their fight.

I thought it was done.

That’s what we train for exactly, my whole camp. Like I said, I was trying to come for his head but that little ba**ard is tough as hell, man.

I wrapped onto that neck. I tried to squeeze it. Trust me, I tried to finish him. I heard him gargling and he f*cking slipped out and I was like, ‘F**k.’”

Brian Ortega on his UFC 266 loss against Alexander Volkanovski.

For Ortega, Saturday night’s loss now sees him 0-2 in his last two title fights, with the first disappointment being against Max Holloway.

However, having done his cause no harm last weekend, fight fans will be hoping the American jiu-jitsu ace can bounce back quickly and reclaim his place as a legit title contender.