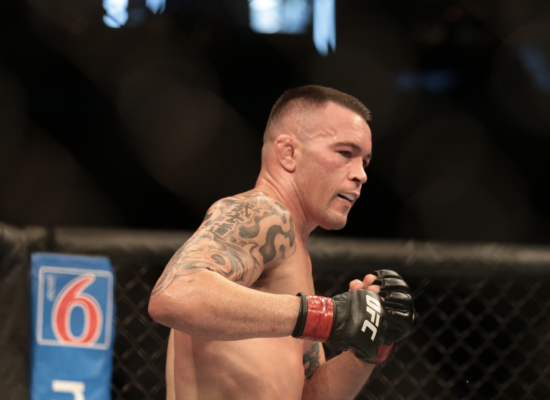 Now a fully established member of the UFC’s roster, the all-American has gone on to rack up 11 wins since his promotion debut seven years ago.

Despite clearly being a very talented fighter who has a particularly impressive wrestling style, Covington’s out-of-octagon antics have seen him become one of the most controversial figures in the sport.

Best known for his trash-talking, there are very few fighters who haven’t experienced Covington’s wrath at one point or another.

The latest star to come under attack is fan-favourite ‘Wonderboy’ Thompson.

Age is Just a Number

Despite being well into his late thirties (38), Thompson appears to still be at the forefront of the sport.

Following two title defeats against old rival Tyron Woodley back in 2017, Thompson, clearly undeterred by his shortcomings, has continued to try and climb back into the championship picture.

A quick turnaround bout and a unanimous decision victory over former title challenger Jorge Masvidal at the end of 2017 helped ‘Wonderboy’ remain at the top of the division’s rankings.

However, following shock back-to-back defeats against English striker Darren Till and later Anthony ‘Showtime’ Pettis, ‘Wonderboy’ knew he’d have to string some form together if he was going to get another crack at welterweight gold.

Within the last 18-months, the American karate ace has beaten Vicente Luque and Geoff Neal, both via unanimous decision, and is now expected to fight dominant champion Kamaru Usman sometime in the near future.

Although it widely accepted that the 38-year-old will have to see Covington rematch against Usman first, there is a real possibility that should Thompson beat Gilbert Burns at UFC 264 next month, he’ll be next in line.

“The Guy is a Joke!” – Covington Dismisses ‘Wonderboy’s’ Title Hopes

Despite being a hugely popular figure among the mixed martial arts community, one person who is clearly not a fan of Thompson is Covington.

Speaking exclusively to MMA Fighting, the 33-year-old has reacted to the possibility of ‘Wonderboy’ securing a third shot at the welterweight title in the near future.

He’s gonna get hurt, for sure. He’s gonna come back for a paycheck, and these guys don’t know when to leave. You’ve got to know when it’s your time to hang it up. Your time has passed, you’re gonna get really hurt if you want to stay in this. But some guys want to take a paycheck to ruin their health.

The thing is, ‘The Karate Kid’ — which is a joke he’s still calling himself a kid — the guy’s a 40-year-old virgin, he drives kids around in a karate van and wants to call himself a boy.

No, you’re a grown ass man, you’re almost a grandfather now. You can see the gray hairs coming out of the side of your head.

If anything, that guy needs to stop complaining, man. He’s had, what, two or three title shots? He’s had more title shots than anyone in this division. He got destroyed by Woodley. He got dropped, bloody. Man, the guy’s a bum.

I don’t know why he’s trying to talk like he deserves a title shot. You just got knocked out by Anthony Pettis like a year or two ago. A lightweight, a guy that’s not even signed by the UFC anymore.

You’re on a two-fight winning streak. Your last fight you were beating a busboy for Outback Steakhouse. Think about that for a second.