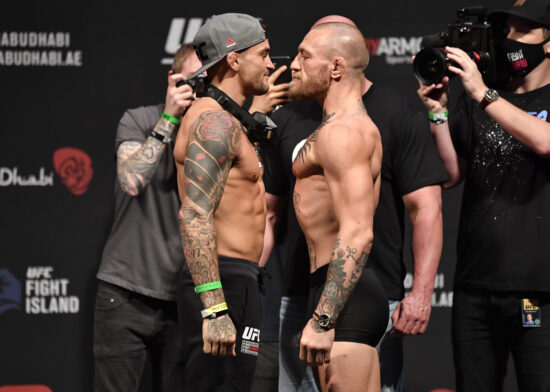 Ahead of their exciting trilogy bout later this year, Dustin Poirier has shockingly claimed Conor McGregor has not followed through with his promise to donate $500,000 to charity.

Leading up to the pair’s rematch earlier this year, McGregor made a promise to gift his opponent’s charity ‘The Good Fight Foundation‘ a whopping $500,000.

Although the lead up to UFC 257’s main-event saw both lightweights exchange pleasantries, it was clear there was still a competitive rivalry simmering underneath the surface.

In what turned out to be one of the promotion’s biggest-selling PPVs, UFC 257 eventually saw Poirier steamroll McGregor and claim a second-round TKO victory.

Following his win over McGregor in January, Poirier, whose only loss since 2017 came against Khabib Nurmagomedov, was arguably set for a title rematch against his Dagestan foe.

However, despite Poirier reaffirming his top contender credentials, just a few weeks earlier, following the tragic death of his beloved father, Nurmagomedov announced his retirement from professional mixed martial arts.

Although president Dana White failed on several occasions to lure Nurmagomedov out of retirement, the American promoter was eventually left with no choice but to piece together a title fight for the now vacant lightweight strap.

Despite Poirier being first in line, it quickly became apparent that the American striker was leaning towards a lucrative trilogy showdown against McGregor rather than a title fight – at least for now, anyway.

White soon confirmed that not only would UFC newcomer Michael Chandler be facing number three contender Charles Oliviera for the lightweight title at UFC 262, Poirier and McGregor would also meet for a third time in July.

Although the build-up to their UFC 257 clash saw both fighters showcase mutual respect, it’s becoming increasingly more apparent the pair’s trilogy bout will not be as nice.

McGregor had previously promised to donate half a million dollars to Poirier’s charity foundation, which works to help some of societies most disadvantages individuals.

However, for as grand as McGregor’s gesture appeared, according to Poirier, the Irish superstar has since backtracked on his promise.

Whether or not the pair’s agreement has been miscommunicated in some way, or if McGregor really has withdrawn his charitable offer, fans may never know.

However, one thing is for sure – with UFC 264 on July 10 just a few months away, fans don’t have long to wait to see the pair settle their differences the only way they know-how.