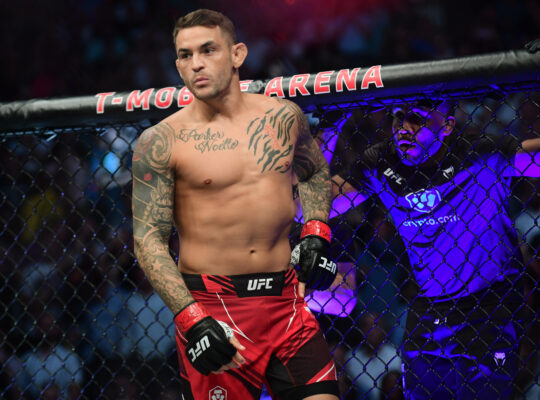 UFC lightweight Dustin Poirier is set for a title showdown against Charles ‘Do Bronx’ Oliveira at UFC 269 later this year.

Not only that though – the American has remained inside the lightweight ranking’s top 5 for several years now, which, considering how stacked the division is, is testimony to how dominant the 32-year-old has been.

However, after failing to beat retired G.O.A.T contender Khabib Nurmagomedov back in 2019, Poirier is now hoping to go one better and hasn’t ruled out a change in weight should he come away from December 11th as the new king at lightweight.

But no, honestly, my goal isn’t to try to have the most successful title defenses. I don’t know. We’ll see. One day at a time.

I can’t look, none of that is even a reality until December 11th happens, and I get my hand raised.

I have to do that first before we can even go into these conversations because I don’t know what’s next.

I live my life one day at a time, man; a quarter-mile at a time.

Ahead of UFC 269’s main event, Poirier is set to be tested to his limit as he prepares for a title bout against the hugely technical Oliviera.

Boasting the highest number of submission victories (19) in UFC history, Oliviera is dangerous in every single area of a mixed martial arts fight.

Poirier will be wary of the champion’s weapons and will definitely want to avoid any repeats from his fight against Nurmagomedov which ended in him tapping to a rear-naked choke.

UFC 269 is expected to be a massive night of fighting action with Poirier and Oliviera’s lightweight bout set to be the final pay-per-view headliner of 2021.

UFC 269 Dustin Poirier vs. Charles Oliveira: Tale of the Tape