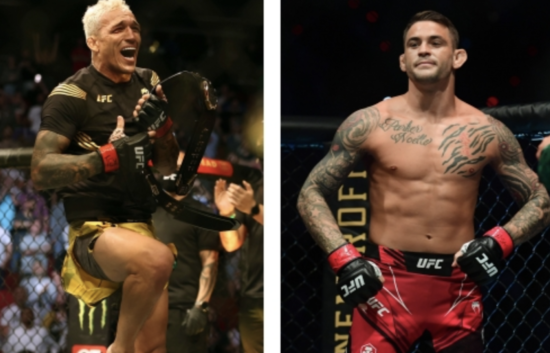 UFC 269, which is scheduled to take place on December 11, is shaping up to be one hell of a card.

Recent reports have suggested that a UFC lightweight title showdown between champion Charles Oliveira and top contender Dustin Poirier is set to headline the blockbuster pay-per-view.

Poirier and Oliveira have been on a collision course for quite some time and following his recent trilogy win over Conor McGregor, it was only a matter of time before ‘The Diamond’ was awarded a title shot.

Looking to defend his title for the first time since beating fellow contender ‘Iron’ Michael Chandler earlier this year, Brazilian Jujutsu ace Oliveira will be hoping to head into 2022 still with gold strapped around his waist.

It has been reported by MMA Fighting that the UFC is hopeful of finalizing the title bout following a verbal agreement from both the South American and Poirier.

In addition to the UFC hoping Poirier will take on Oliveira, it is now expected that a women’s bantamweight title fight between Amanda Nunes and Julianna Pena will serve as the event’s co-main.

Poirier vs. Oliveira: What the Oddsmakers are Saying

Should this bout be finalized, it will undoubtedly be one of the most exciting title matchups in recent history.

Looking to extend his winning streak to 10 fights, champion Oliveira is a fighter in red hot form.

Elsewhere, and in equally impressive form, Poirier’s only loss in the last five years has come against retired legend Khabib Nurmagomedov.

The margin for error in this proposed title fight is highlighted by the opening odds, which, although they see Poirier as the narrow favorite, are still close, nevertheless.