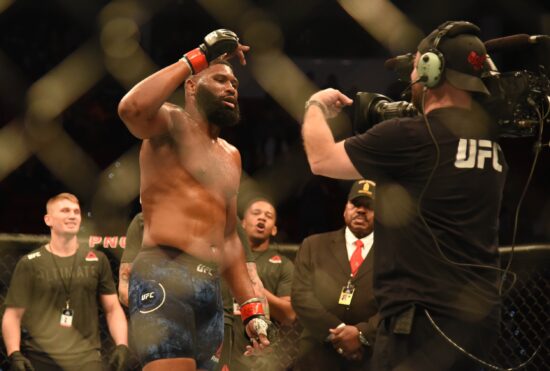 The no.2 and no.4 of the UFC heavyweight division will clash in Saturday’s event, headlining the Fight Night 185. These two guys have superb reputations, and it is no wonder why many experts predict that the winner of this contest will automatically receive the opportunity to fight for the championship belt this summer.

Blaydes is on the rise, improving from fight to fight, while on the other side, Lewis’s power is already known to everyone.

Razor Bidding for the Title

With 29 years, Blaydes (14-2) is yet to hit the prime, and judging by the way he develops properly, the prospects of seeing him winning the title someday are very good. As time goes by, he slowly adds numerous features to his arsenal, trying to become versatile as much as possible.

Blaydes is a superb wrestler, probably the best in the division, but he learned several more tricks over the past few years, for example, perfecting his striking abilities. He still isn’t that one-punch knockout guy, but is getting there, often finishing the battles with hard strikes following some wrestling.

In the previous four events, Blaydes defeated Justin Willis, Shamil Abdurakhimov, former UFC heavyweight champ, Junior dos Santos and Alexander Volkov. In all of these fights, the Razor was dominant.

Lewis’ Quest For the Second Chance

Derrick Lewis (24-7) was one win away from getting his hands on the UFC heavyweight title, but he lost to Daniel Cormier at the UFC 230, and that chance for taking the silverware went wasted.

The Black Beast lost one more event, immediately after that title clash, only this time against Junior dos Santos, who would beat him on March 9. However, after that failure, Lewis bounced back into the saddle with three straight victories. First, he defeated Blagoy Ivanov via a split decision, then Ilir Latifi following a unanimous decision, and in the end, KOd Aleksey Oleinik in August 2020.

Lewis’ KO power is already in all the history books, as he has 11 knockout victories, some of them like the one against Alexander Volkov, memorable. Also, do not forget that he defeated Francis Ngannou, and even though that match happened to be one of the worst spectacles in the UFC, he still holds a triumph over the Predator.

Blaydes vs Lewis Prediction and Pick

Blaydes has much better cardio, and his wrestling is even better than Daniel Cormier’s. DC would beat Lewis via submission, and if he could do that, Razor’s chances are also very good. If you remember, the knockout Lewis posted against Volkov came from desperation, following a big beating the Russian handed to the American. Meanwhile, Blaydes rolled over Volkov, and that is yet another signal that he should have an edge in this matchup.