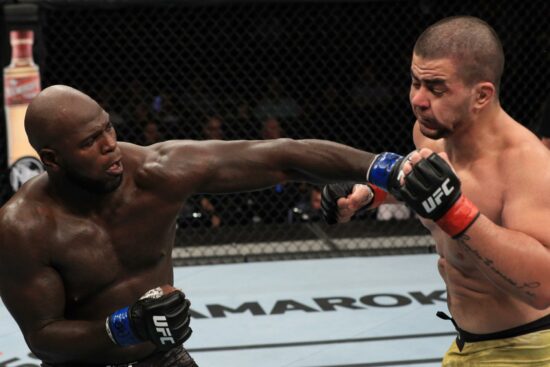 Two heavyweight prospects, Jairzinho Rozenstruik and Ciryl Gane, will clash at the upcoming UFC Fight Night 186. These two will try to force their way into the top three places in this division and make themselves a legit contender for challenging the champion (regardless of his name) at some point. Both Rozenstruik and Gane have defeated Junior dos Santos via KO in their latest respective fights and are coming into this bout full of confidence.

The rise of the 32-year-old Surinamese brutally came to an end against Francis Ngannou, who knocked out his rival in just 20 seconds. In a match that was anticipated by many, Rozenstruik was publicly humiliated and shown that he still needs to work very hard before challenging the top guys in the division.

This was arguably the toughest setback in Rozenstruik’s career, but he faced that adversity and won, coming back with a triumph against the former UFC heavyweight champion, dos Santos, via second-round TKO. Rozenstruik would prove in that match that he doesn’t only have unreal punching power, but a strong mentality, accepting his previous loss, going back to the basics and coming back in big style.

Yet, Bigi Boy is still a one-dimensional fighter despite his improvements considering wrestling and other areas. All the difference in his previous wins was made by fantastic knockout power, and for the moment, that is his biggest (and the only) weapon.

Gane, the Next Superstar

Bon Gamin, as the fans call this dude, has seven matches in his pro career and nothing but wins. He is by far the most promising heavyweight in the UFC, and that is something that all the experts and fans agree on. Gane has incredible power, but apart from that, the French fighter is extremely versatile. He knows how to kick, punch, wrestle, grapple and is superb when it comes to tactics. In a word, Gane is the entire package. We haven’t seen a guy with such diverse attacking potential in quite some time.

The only thing he lacks is experience, which is why some of the fans doubt his abilities. Gane has been properly tested only twice so far, against Tanner Bosser, whom he demolished in three rounds, winning that contest via unanimous decision, and against dos Santos. He would knock out the former champ at the UFC 256, earning a ticket for the top echelon of the heavyweight division.

Rozenstruik vs Gane Prediction and Pick

Gane is our choice here, because of his above-mentioned versatility. Even though his chin wasn’t properly tested, we can hardly believe that Rozenstruik might endanger the rival who has far more options in the octagon than Bigi Boy. If, by any chance, Gane takes Rozenstruik down to the ground early on, we will see a very quick victory. The undefeated French has the biggest advantage in this area, showing impressive submission skills over the past few matches.