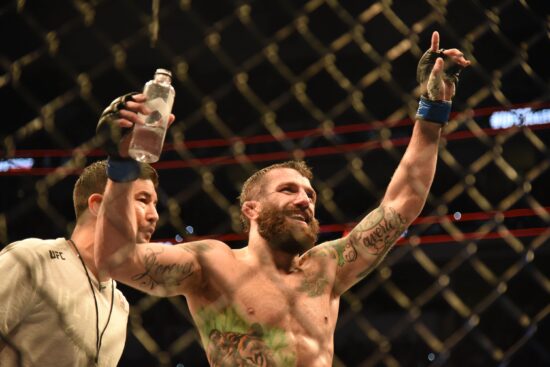 Michael Chiesa and Neil Magny weren’t supposed to headline this UFC Fight Night. However, once Khamzat Chimaev withdrew from his fight against Leon Edwards, a few days before the New Year, the UFC had to react, and they picked the bout between these two guys to serve as the headliner.

Chiesa is the No.8 in the welterweight division and Magny one place lower, so this is a very important match for the future of these two fighters. Whoever wins might receive some attractive offer or even a title-eliminator invitation.

Since his debut in the welterweight division, the Maverick has been perfect, winning three times in a row. At first, he defeated Carlos Condit, via kimura submission, and after that posted two unanimous decision win over Diego Sanchez and the UFC legend Rafael dos Anjos.

The latter bout was in January 2020, and since then, Chiesa didn’t have any fights. Some believe this could be a big handicap in the upcoming battle because his opponent had three during that period.

An extremely tough and patient fighter he is, Chiesa’s matches aren’t that thrilling. He likes to grapple, and 11 of his 17 victories came following a submission, making him one of the best in the organization in this aspect. Meanwhile, he has six decision victories, without a single KO triumph.

Since March 2020, Neil Magny had three fights, and all of them ended with him on the winning side. And all three were victories.

The first victory during that period for the 33-year old was against Li Jingliang. Anthony Rocco Martin was the next victim, before posting the biggest success of his career, outperforming the former welterweight champ, Robbi Lawler. It seems that almost one and a half year of absence made the American hungrier than ever, and he isn’t stopping now.

Unlike his future opponent, he has seven KO wins, but as Chiesa, Magny too knows fight to win via scorecards. Fourteen of his 24 victories were decisions (among them a split one vs. Gastelum), seven after a KO, and just three submission triumphs.

Magny’s main weapons are strong jabs and excellent movement around the octagon. He has a solid chin, but most of his rivals managed to outperform him on the ground. Just look at the method of defeats, four were via submission.

Chiesa vs Magny Pick and Prediction

We are ahead of one very interesting fight. Be sure that it won’t be appealing for watching, in terms of seeing some highlight reel moves, but both Chiesa’s and Magny’s involvement promises a tough and ferocious battle.

After a bit of internal discussion, our team gave a slight edge to Chiesa, who is much better on the ground and would undoubtedly use this circumstance. Magny’s takedown defense isn’t very strong, and in our opinion, once Chiesa takes the rival to the canvas, he will finish the job sooner or later.