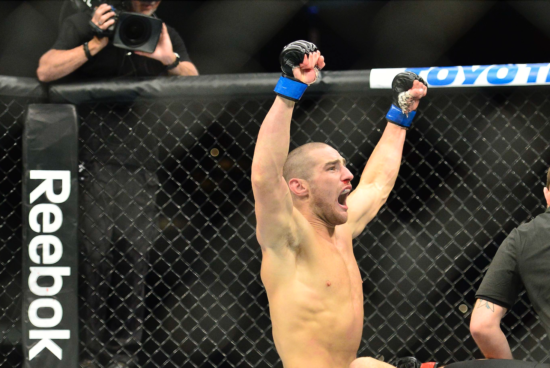 Following last weekend’s exciting fight card which saw former bantamweight champion TJ Dillashaw make his long-awaited return from a two-year drugs suspension, fight fans have barely any time to catch their breath ahead of this weekend’s next Fight Night.

The UFC’s state-of-the-art Apex Centre will once again be called into action when middleweights Uriah Hall and Sean Strickland go head-to-head in the event’s headliner.

Below is the event’s full schedule including all of VegasOdds’ main-card picks.

Saturday’s main-card opener has the potential to steal ‘Fight of the Night’.

Known for his ‘do-or-die’ attitude, welterweight Bryan Barberena, who is taking on Jason Witt, could be set to secure his 11th knockout career win.

Following back-to-back losses for both of these men, Saturday night’s outcome will likely prove decisive in either fighter’s long-term UFC future.

Suffering four consecutive decision losses between them, Beniot and his opponent Adashev will both want to avoid leaving this one up to the judges.

Making just his second appearance in the UFC, Niklas Stolze, will be hoping to right the wrongs of his debut bout against Ramazan Emeev last summer.

However, coming up against a notoriously resilient Jared Gooden, bagging his 13th career win will not be an easy task.

After narrowly losing his last two fights via decision, although a tough fight to call, I am leaning towards a Gooden win this time around.

After both making their name on Dana White’s Contender Series and then going on to lose their UFC debut fights, similarly to Beniot’s bout against Adashev, Saturday night’s main-card could have huge implications in the careers of Cheyanne Buys and Gloria de Paula.

With virtually identical records, this all-female strawweight bout is ridiculously tough to call, but looking at the fighter with the slightly superior resume, I am going to tip Buys for the win – but it’ll be close.

I expect this one to be won and lost on the ground.

With a stunning 32 submission wins between them, it is virtually inevitable that both these highly-skilled bantamweights will be looking to make it 33.

However, with both grappler’s groundwork undeniably good, I fully expect each fighter to cancel one another out with Yahya narrowly edging the judge’s scorecards.

Don’t blink in this one folks.

Hard hitters Uriah Hall and Sean Strickland will compete in a five-round main-event, although I do not expect all 25-minutes to be needed.

Currently, on an impressive four-fight win streak, my tip is for Strickland to make it five on Saturday.