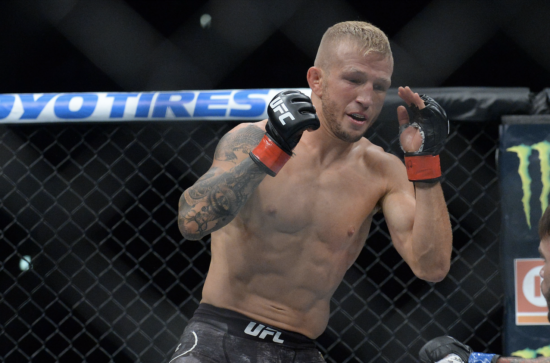 The UFC’s state-of-the-art APEX Centre is once against set to stage this weekend’s latest Fight Night.

Former bantamweight champion TJ Dillashaw is set to return following a two-year doping suspension and will face off against rising contender Cory Sandhagen in the main event.

Below is the event’s full schedule including all of VegasOdds’ main-card picks.

One of the toughest matchups to call across the entire fight card.

The real question will be what kind of condition does Mickey Gall comes into Saturday’s main-card opener in.

If the American comes in with a full gas tank, I think an early upset could be on the cards.

This fight between Miranda Maverick and Maycee Barber is a stylistic dream.

Notoriously skilled on the ground, Maverick should cause the highly-rated Barber a world of problems.

I will be amazed if the heavy-hitting duo that is Darren Elkins and Darrick Minner will go the distance.

However, forced to favor one fighter – my money is on Minner – just.

This one should be action-packed from the get-go and could even claim ‘Fight of the Night’.

Unbeaten in all of his three UFC fights, I am tipping bantamweight Kyler Phillips to extend his impressive streak to four.

However, beating a notoriously tough and gritty Raulian Paiva won’t be easy and will likely take the judge’s to call the fight’s eventual winner.

Between Maverick and Barber and the co-main event between Aspen Ladd and Macy Chiasson, it could very well be the ladies that steal Saturday night’s show.

Two great bouts in which fans could arguably flip a coin to determine the winners.

For the co-main, I am narrowly leaning towards a Ladd win, although, I do expect Chaisson to be one of her toughest battle yet.

TJ Dillashaw is back ladies and gentlemen!

The former bantamweight champion is set to return to the octagon following just over 900 days worth of inactivity due to a doping suspension.

Looking to put himself right back in title contention, Dillashaw will be hoping to secure a monumental victory over one of the division’s most impressive fighters.

Coming into Saturday night’s main event straight off the back of a hellish flying knee knockout over veteran Frankie Edgar, Sandhagen will be looking to use Dillashaw’s name to propel himself next in line to fight for the 135lb belt – currently held by Aljamain Sterling.

Having said that – although this one is a hugely exciting encounter and one that is painfully tough to call – I can’t get away from the huge value in Dillashaw’s markets.