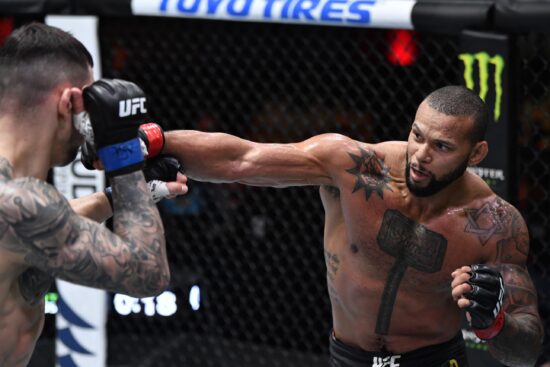 The UFC returns to the UFC Apex in on Saturday, August 6 with the event titled UFC on ESPN: Santos vs Hill a.k.a. UFC Vegas 59 or UFC on ESPN 40.

The main card is staked, with the headliner being a light heavyweight clash between the former title challenger Thiago Santos and rising star Jamahal Hill.

Vicente Luque is also coming back to the octagon, this time to fight Geoff Neal in a welterweight bout, while Augusto Sakai and Sergey Spivak lock horns in a heavyweight duel.

We did an in-depth preview of all the aforementioned fights in our UFC on ESPN: Santos vs Hill predictions piece. That’s where you can check out our top picks for the fight-winner betting market.

However, if you’re looking for more quirky bets, you better stay on this page, that’s because we’re now going to present you with our best UFC prop bets for Saturday’s exciting event.

With each of his previous five UFC fights ending before the final bell, Jamahal Hill is obviously a fighter who knows how to put on a good show. He won four of those fights by KO or TKO, but one of those ended up overturned after he tested positive for weed.

Hill’s got only one loss in the UFC – it happened in June 2021 against Paul Craig who broke Hill’s arm in that fight but Sweet Dreams kept fighting before the ref finally ended the fight.

Knowing all this, one would think we could Saturday’s fight ending before the final bell as well. Such a scenario would be certain if Hill was fighting another fighter. However, his opponent is Thiago Santos, whose previous three fights went the distance.

His most recent fight lasted all five rounds, but we did see Santos knock his opponent – Mahomed Ankalaev – to the floor, showing that he still has it.

Even though we think Hill is going to win the UFC on ESPN 40 headliner, we wouldn’t be too surprised if Santos won by KO/TKO. Either way, we’re almost certain the fight will not go the distance, which is what’s our UFC prop bet suggestion.

From May 2020 to August 2021, Vicente Luque went 4-0, winning the Performance of the Night twice along the way. His vintage run ended in April 2022 when he lost to Belal Muhamad by unanimous decision. What’s interesting is that even in that fight, Luque was extremely aggressive, evident by the fact that he landed more strikes than his opponent.

We expect to see the same from him on Saturday. This time, however, he should be able to get himself a win. And we think it’s going to happen early in the fight.

Augusto Sakai is 15-4 in his professional career, while his UFC record is 4-3. What’s interesting is that three of those losses happened in his previous three trips to the octagon. Not only is he 0-3 since September 2020, but Sakai lost each of those fights by KO/TKO.

The worst thing is that the same is very likely to happen at UFC on ESPN: Santos vs Hill. Why? Because he’s squaring off against a Moldovan knockout artist Sergey Spivak. Sakai’s opponent is 14-3 overall, with a 5-3 record since inking his UFC deal. Of those five UFC wins, two happened by KO/TKO. We think he’ll add a third one to the list on Saturday.