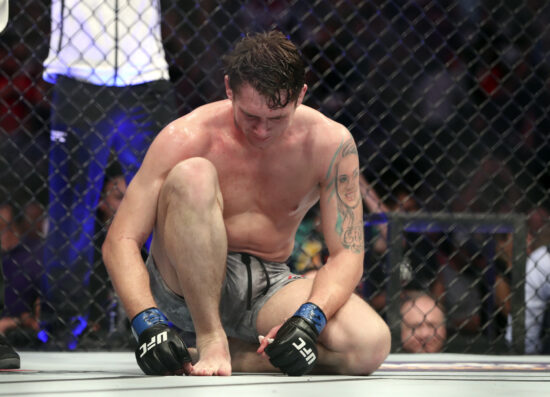 The UFC will return again this weekend where the promotion’s APEX Centre will once again play host to an exciting evening of violent entertainment.

Saturday afternoon at the APEX in Las Vegas will see middleweight contenders Darren Till and Derek Brunson collide in the main event.

Britain’s Till hasn’t fought since his narrow defeat to Robert Whittaker over 12-months ago, however, looking to cement his place among the best 185lb’ers, the talented kickboxer will be hoping to beat Brunson and claim his seventh win in the UFC.

Other notable matchups include a quartet of Brits all looking to make their mark on the US’ biggest stage.

Heavy hitter Tom Aspinall will take on Sergey Spivak in the event’s co-main, with fellow Brits Jack Shore facing off against Luidvik Sholinian, Paddy ‘The Baddy’ Pimblett making his promotional debut against Luigi Vendramini, and Molly McCann in desperate need of a win against Ji Yeon Kim.

Undoubtedly heading for big things, Liverpool’s Pimblett will be hoping to kick start his UFC career off with a respectable win against Brazilian Vendramini.

I expect Pimblett to take his time in this one, but suspect his ground game to be the ultimate decider in what could be a bout that goes the distance.

This should be a great fight and with both fighters currently enduring tricky spells, Saturday’s bout will have an added bit of spice.

Both men are on two-fight losing streaks and will be keen to ensure their runs do not extend to three.

I am expecting a tense and cagey affair, but think Lithuanian striker Bukauskas may just. have too much for his American opponent.

Another great match up.

Although an exceptionally close bout to try and call, I expect this one to go the distance with Morono narrowly edging it on the judge’s scorecards.

Britain’s Aspinall is destined to breach the division’s top 10 soon and a win this weekend against Spivak could do exactly that.

With a fighting style reminiscent of unbeaten top contender Ciryl Gane, I am expecting another big performance from Aspinall this weekend.

Darren Till vs. Derek Brunson

Styles make fights and this one should be a great example of that.

Kickboxer by trait, Till will be hoping to keep Brunson on the feet and unleash enough damage to end the fight early.

Prediction: Darren Till to win via knockout.