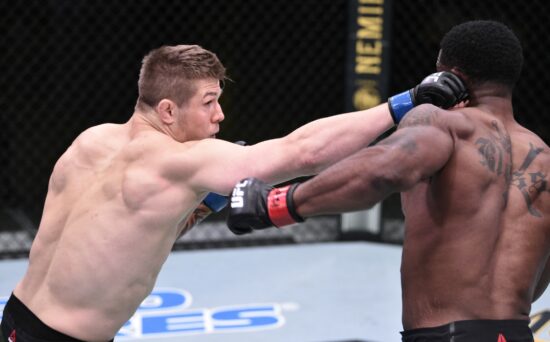 Until March 30, no one had any idea the Fight Night: Vettori vs. Holland was going to happen. The story goes that the headliner bout of the event was going to be Darren Till vs. Marvin Vettori. However, the ex-UFC champ broke his collarbone. On only nine days’ notice, Kevin Holland decided to step in.

As a result, the Vettori vs. Holland will headline the event. There are going to be four other fights on the main card, as well as nine preliminaries.

Practically, Vettori had only ten days to adjust himself to the fighting style of his new opponent, who is three inches taller than Till and has a 5.5 inches longer reach.

On the bright side for Vettori is that Holland had only a nine-day notice. Furthermore, Holland fought his previous fight on March 20. With three weeks between two headliner fights, he’s going to tie the record for the shortest turnaround with Figueiredo and Bisping, who did it in 200 and 2017, respectively.

Holland lost by points to Brunson three weeks ago, thus keeping his KO losses to zero. We don’t think Vettori has what it takes to change that, especially knowing that he’s won only two of his 16 wins by knockout.

Instead, we expect the judges to be the ones to decide the fight winner. But, who is it going to be? Probably Vettori, but we wouldn’t bet on it.

Vettori vs Holland is the headliner of the event taking place on Saturday evening; however, there are plenty of other fights worthy of your attention, starting with the four other main card bouts. Those are, namely:

Probably the most interesting of those is the featherweight clash between Allen and Yusuff, who are both undefeated since joining the UFC.

Allen has more experience in the promotion, but Yusuffs’ recent performances inside the octagon are more impressive. It should be a close fight, which could last until the final bell.

Pretty much the same goes for all the remaining main card fights, all of which pit fighters of similar abilities against one another.

There are going to be nine preliminary fights at the UFC Fight Night: Vettori vs Holland. The bouts in question are the following:

All the fights from the preliminary card seem pretty unpredictable, as evident by the odds online bookmakers have released.

Speaking of odds, they suggest Norma Dumont is going to have a field day against promotional debutant Erin Blanchfield. However, we need to call for caution for this one, as Dumont only found out she was going to face Blanchfield a week ago. Before that, she was preparing for the fight with Bea Malecki, who unexpectedly decided to pull out of the event.

Another fight in which oddsmakers expect the favorite to win easily is the heavyweight clash between Yorgan De Castro and Jarjis Danho. Sure, De Castro might be more famous than his next opponent, but the “Man Mountain” should not be underestimated.