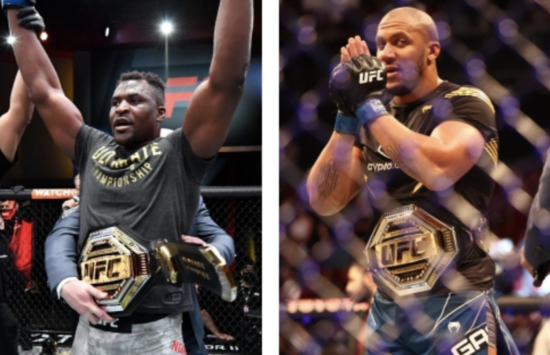 That’s according to a recent report from French media outlet La Sueur, who claims the two best heavyweights in the UFC are set to meet at UFC 270 on January 22, 2022.

Although a location for the first pay-per-view of 2022 has yet to be confirmed, La Sueur suggests that Las Vegas’s T-Mobile Arena is likely to be the event’s destination.

Ngannou vs. Gane: What the Oddsmakers are Saying

Following his meteoric rise to the top of the heavyweight division, Ngannou is widely viewed as the most dangerous fighter at 260 lb.

However, while former champion Stipe Miocic now looks for a route back to glory, another contender has quietly emerged.

Fighting out of France, unbeaten (10-0) Gane, who is one of MMA Factory’s biggest stars, recently had his first taste of UFC gold.

Having convincingly beaten Lewis at UFC 265 earlier this year, the French powerhouse, who displays some remarkable technical attributes considering his size, is now set for a date with Ngannou.

However, most interestingly, with Ngannou and Gane reportedly set to clash at UFC 270 early next year, the online oddsmakers appear unable to split the pair.