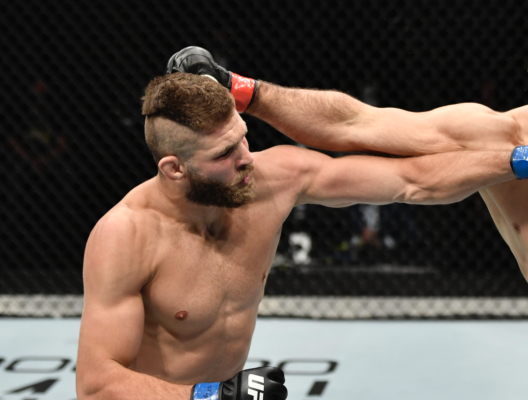 Looking to reclaim his place among the division’s title challengers, Reyes, who came into this weekend’s fight off the back of a loss against Jan Blachowicz, would have been hoping to claim a win over the surging Prochazka.

The bout, which always had the potential to win ‘Fight of the Night’, didn’t disappoint.

Two heavy hitters, both in peak condition, went toe-to-toe in what turned out to be a back-and-forth brawl.

As this weekend’s main event kicked off, both fighters exchanged several significant strikes.

It didn’t take fans long to realize that both fighters had the power required to see the other hit the canvas – and although available, it was obvious that all five rounds would not be needed.

The first round played out quite evenly even though Reyes was the more visibly damaged fighter.

It was to be the fight’s second-round that put the rest of the 205lb division on notice though.

With just 30-seconds left before the bell, Prochazka, with his opponent backed up against the cage, unleashed a truly mesmeric spinning elbow.

Landing in devastating fashion, the unorthodox Czech brawler could not have placed his strike any better.

Cutting pin-point precision saw Prochazka connect perfectly with Reyes, who immediately went out as his body slammed to the canvas, in shocking fashion.

Prochazka Has Eyes on Title Fight

Following what was the biggest win of his professional career, Prochazka believes his win against Reyes has put him firmly within title contention.

Yes, I think I deserve that fight, but my journey in the UFC is so quick and I’m not enjoying that so much like I want. But I think yes, I deserve that title fight, yes.

Jiri Prochazka on a possible title fight against Jan Blachowicz

Going on to address the brutal way in which he claimed the victory over a tough and gritty Reyes, Prochazka admitted that a spinning elbow was not part of the script.

That was just the flow. That’s why I have this antenna (hair style), to catch these ideas. Did you see my blocks? My defense. In that first fight (UFC debut), there wasn’t (any defense). There’s not so much defense in this fight, but it’s how it worked. I still got to fix some things.

It was a great feeling. Dominick was a great opponent and he’s a nice, nice guy, like a person. After the fight and before the fight I felt from him, just nothing. No hate – just pure fighting, that what it’s about. That’s what I like.

Jiri Prochazka on how he knocked Dominick Reyes out

Where Does Reyes Go From Here?

Prior to this weekend’s main event, Prochazka was ranked number five in the light heavyweight division. Reyes, on the other hand, came in ranked third.

Following what is now a three-fight skid, the American-Mexican will undoubtedly fall well outside of the division’s top five and will therefore be forced to fight his way back within contention.

Although one of his last three losses did come against pound-for-pound great Jon Jones, there is no denying that Reyes now finds himself in precarious position within the promotion.

Had fellow 205lb’er, Jimmy Crute, not recently suffered a nasty knee injury against Anthony Smith at UFC 261, a potential matchup between him and Reyes would have made sense.

However, with it still unknown how long Crute is likely to be on the sidelines for, Reyes, depending on his own recovery time, may need to find a different opponent – and the perfect man for the job could currently be sitting ranked number 10.

Having not fought since his win over Ryan Spann last September, fan-favorite Johnny Walker is an available fighter.

A future bout between Reyes and Walker would certainly whet the appetite of fight fans and could serve as the perfect ranking decider.

Should both men be faced against one another, a win for Reyes would see him reclaim his place among the division’s best, whereas, a win for Walker would undoubtedly see him breach the upper echelons of the division.