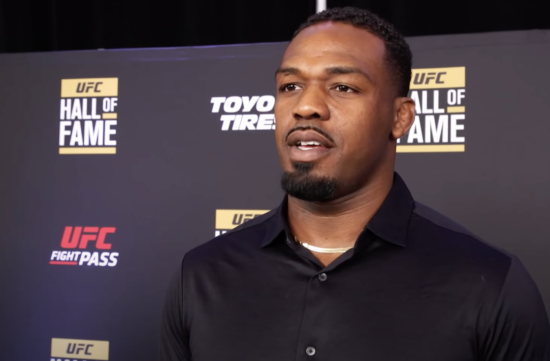 Jones, 34, boasts an incredible professional mixed martial record of 26-1 and is widely regarded as the best fighter to ever step inside the octagon.

Despite recently vacting the light heavyweight title following a narrow split-decision victory over Dominick Reyes, Jones reigned supreme over the 205lb division for much of the time he was actively competing.

However, having made the decision to move up to challenge the heavyweights, Jones, who has yet to fight at 265lb, is now preparing for what will arguably be the most intriguing debut in the sport’s history.

With the heavyweight division currently run by African powerhouse Francis Ngannou, becoming a two-weight champion will not be a straightforward task for the Jones.

However, speaking to reporters (as quoted by MMA Junkie) on Thursday following his and Alexander Gustafsson’s introduction into the UFC’s Hall-of-Fame for their incredible 2013 brawl, Jones revealed what his ideal weight is before returning to action.

I feel really great. My goal is to get up to 270 pounds. My goal is to be the most technical, the most well-conditioned, the strongest out of all the heavyweights. That’s what I want.

I want to take over all across the board and that’s what I’m going to continue working for. I’m very patient and I know I have several more months of work to do. If anyone is impressed with the way I look today, I can’t wait until they see me when I get back in there. I’m planning on doing so much more.

Before, I would start training about 10 weeks before a fight. I would try to get my body fat down and my cardio up and my skills together.

Right now, for the first time in my whole career, I’m actually training consistently. I believe my cardio is fight-worthy right now.

When I get in camp, it’s going to go to an even higher level. I feel I’m in better shape now than I ever did before.

Jon Jones on his transition to heavyweight

Jones is not the only contender at heavyweight for champion Ngannou to worry about though.

Following his impressive rise up through the rankings, capped off with a hugely dominant win over hard-hitter Derrick Lewis earlier this year, French star Ciryl Gane has now emerged as the division’s outright top contender.

With the pair set to collide at some point in 2022, all eyes will be on which fighter comes away with the belt and in turn sets up a mouthwatering showdown against pound-for-pound great Jones.

Addressing his intentions to matchup against either one of Ngannou and Gane, Jones went on to confirm that although a lucritive bout against the current champion would be the bigger of the two potential fights – competiting for the belt is at the forefront of his mind.

If there was someone that was a bigger star than Francis at heavyweight who didn’t have the title, then I would go for that.

But I think Francis is the biggest star at heavyweight. Him and I. And he has the title. That’s what I want.

I’m excited for either (Ngannou or Gane). I think they present two completely different puzzles but yeah, Francis is definitely a bigger star.

It’d be a lot of money lost if Francis were to lose.

I don’t care who wins the fight, I just want the championship.

Jon Jones on facing the winner of Francis Ngannou vs. Ciryl Gane