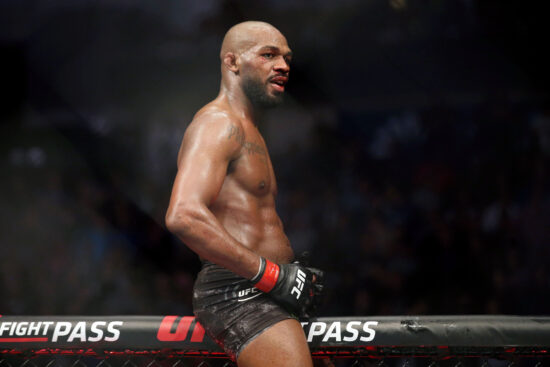 Former UFC light heavyweight champion Jon Jones has recently taken to his social media to offer fans an update on his decision to vacate his title and move up to heavyweight.

Since arriving in the promotion, the American has grown to become arguably the greatest mixed martial artist ever to enter the sport.

Showcasing a near-perfect record of 26 wins and just one contentious loss, ‘Bones’ has cemented himself among the sport’s true greats.

Having first won the light heavyweight title ten years ago, Jones, who then successfully defended his strap 11 times, eventually made the decision to move on up to heavyweight and become a two-division champion.

After announcing his next venture will include a run in the promotion’s biggest division, fans have been left to speculate who the pound-for-pound great could face first.

Following African powerhouse Francis Ngannou’s recent title win over Stipe Miocic, fight fans would have been forgiven for begging for a stunning showdown between the new champ and Jones.

However, following a public spat over fight earnings, UFC president Dana White appears committed to leaving Jones on the back burner and setting up a title bout between Ngannou and Derrick Lewis, instead.

Although White has yet to confirm the heavyweight champ’s next opponent, taking to his social media recently, it now appears Jones has all but ruled himself out of the running.

Following what has been a stunning 13-year long professional career, Jones, despite all his flaws, continues to dismantle every single challenger put in his way.

Despite being 33-years-old, the American, like a fine wine, appears to be getting better with age.

However, in light of his decision to compete with the sport’s biggest and hardest-hitting stars, Jones has insisted he does not want to give his haters any unnecessary ammunition.

Taking to Twitter recently, the former light heavyweight champion took some time to respond to fans who had some thoughts on the star’s impending heavyweight debut.

When Can Fans Realistically Expect to See Jones in Action?

Mixed martial arts is notoriously unpredictable and while no one can really be sure when the light heavyweight GOAT will return to action, a fight at heavyweight this year is looking increasingly more unlikely.

With president Dana White recently confirming that new champion Ngannou will have to defend his title against Lewis next, it is entirely possible that Jones’ emergence at heavyweight will be pushed back until 2022 – at the earliest.

There is still no confirmed date or location for ‘The Predator’s’ first title defense, however, according to leading journalist Ariel Helwani, the promotion has now earmarked September for the powerhouse’s title showdown.

Given White’s insistence that Lewis will secure a rematch against old rival Ngannou, fans will now have no choice but to wait for Jones’ long-awaited heavyweight championship debut.

However, should the American be willing to test himself against supposed lesser opposition, there is always the winner of Ciryl Gane vs. Alexander Volkov, which is scheduled to take place this weekend at the UFC’s Apex Centre.